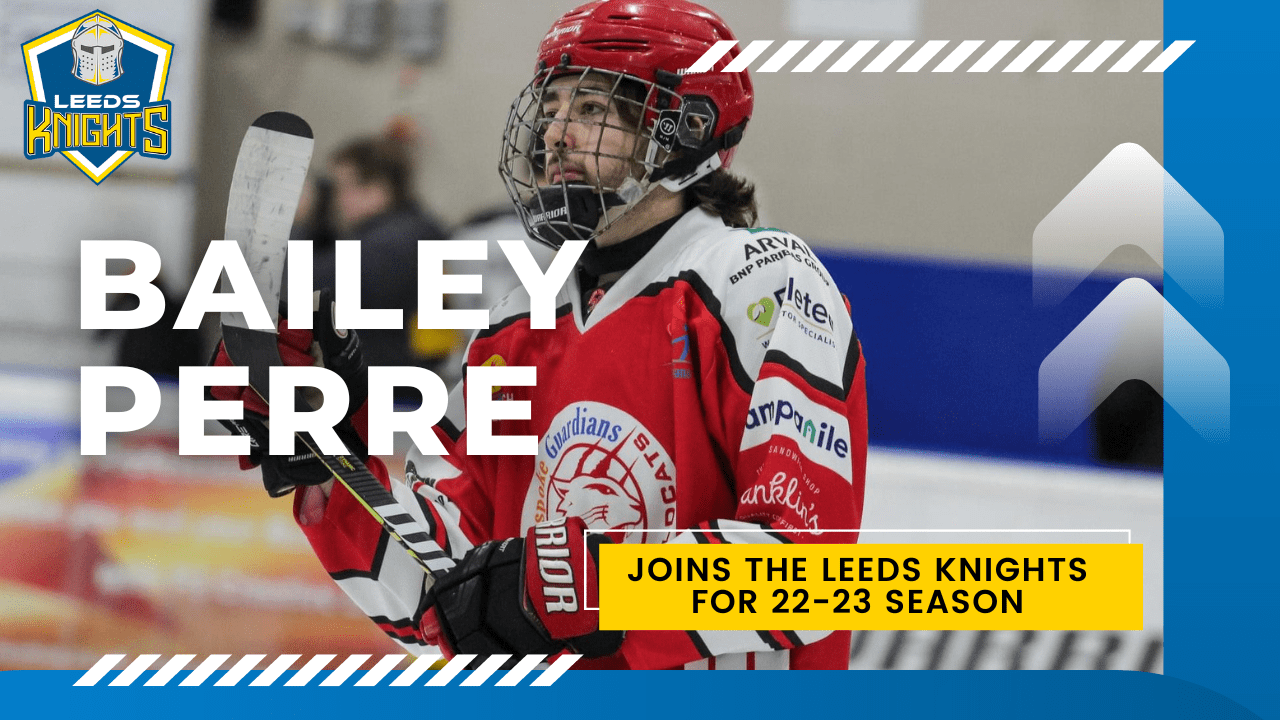 The Leeds Knights are ecstatic to announce the signing of Defenceman Bailey Perre!

Bailey joins the Knights following a 21-22 season that saw him ice 21 times in the NIHL 1 with the Bristol Pitbulls, as well as 6 times for the Swindon Wildcats in the NIHL. The 2004-born youngster is looking forward to making the jump to the NIHL with the Leeds Knights – “I’m excited to get up north and meet the guys, I’ve heard Leeds is a great city and the knights organisation is one of the best national league programmes in the country, I can’t wait to put on the jersey get out on the ice and get the season going…”

Some of you may recognise Bailey’s surname, this is because his brother, Tyler Perre, iced for the Knights on more than one occasion in the 21-22 season. When asked if this impacted his decision to join the Knights, Bailey had only good things to say – “My brother Tyler really enjoyed his time in Leeds last season and had nothing but good things to say about the team, through conversations with Ryan I’ve continued to hear good things, there is lots of young talent on the team and I’m looking forward to playing with the guys, I’ve also heard that Leeds have the best fans in the league and can’t wait to play in-front of them and show them what I can bring to the team!”

However, Bailey isn’t just familiar with ice hockey in Leeds from his brother’s time here, but instead through his relationship to Head Coach Ryan Aldridge. Bailey has spent the past 3 years with Ryan as his coach through the OHA programme, a dynamic that Bailey has enjoyed – “Ryan was a main driver in my decision to come to Leeds… He has helped develop all areas of my game and when Ryan spoke to me about the opportunity to play for him for another year I couldn’t say no, I believe Ryan is one of the best coaches in the country and specifically one of the best at developing young talents.”

The Swindon native plays an aggressive, jump in on the rush style of play, a style that is sure to fit in well with the returning Knights core and the new additions made so far.

Head Coach Ryan Aldridge is also looking forward to working with Bailey again and believes there’s a lot that he has to offer – “I have known Bailey since for a long time and I’ve had the pleasure of working with him daily for the last 3 years or so. He is a great young man who is constantly looking to improve. He plays an intense game and is a team first player. He comes to compete every time he is on the ice, whether that’s for a game or at practice… He bring all the elements I think we needed to improve on as a team – When he said he would like to come to Leeds to further his development I jumped at it!”

Own & Loan: You can purchase Bailey Perre’s jersey and loan it back to him for the 22-23 season, just go to our online store!