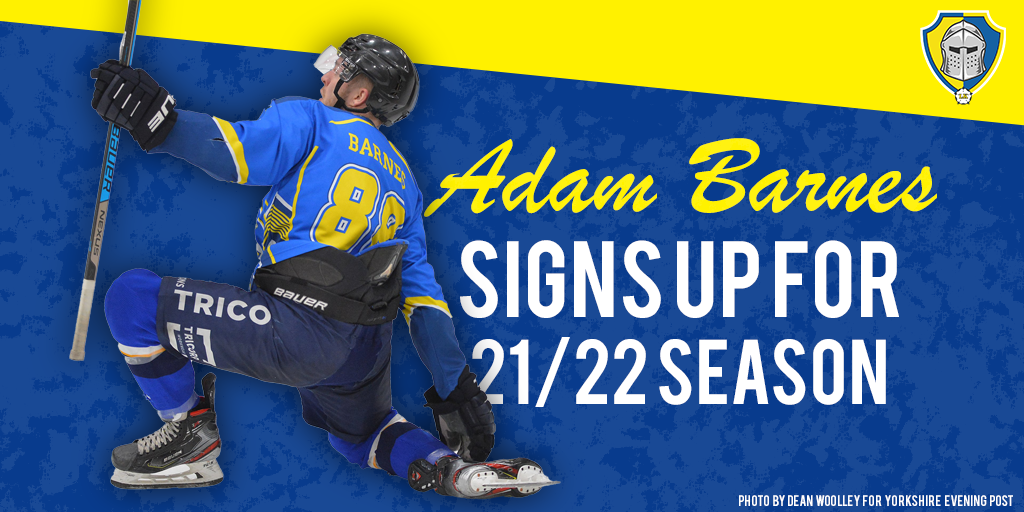 The Leeds Knights are absolutely thrilled to confirm that Adam Barnes will once more be icing for the Yorkshire side for the 21/22 NIHL National Campaign.

The 21-year-old originally grew up playing hockey in Bradford in their junior system. Before in 2015, he moved to Canada to join up with the Ontario Hockey Academy U18 where he stayed for two seasons. In 2017 he made the jump to the USA where he iced in the EHL for the New England Wolves.

In the summer of 2018 a move back to England called and he spent time split between the Blackburn Hawks and the Manchester Storm Elite League side. Adam then moved over to Leeds for their inaugural season where he became a huge fan favourite and a vital part of the locker-room.

Adam will turn 22 in a couple of weeks time and he’s already eager to get back to the new arena in Leeds.

Even though it was such a bumpy ride during that first season, I feel this is where we’re going to start to get a bit more serious and I believe we’re going to be a team to watch out for. The fact that we’ve got a fully-finished rink will help us feel more like a proper hockey team, with a place we can call our own.

“It’s going to be great having such an experienced guy (Dave Whistle) behind the bench, he is going to improve every player’s game. I’m still pretty early on in my career and there is always room for improvement and I feel like Dave can really advance my game to help get me to the next level.

“I feel like we’ve already got a solid foundation in place to be a regular winning team in that league – it’s exciting.”

Likewise, Head Coach Dave Whistle was thrilled to have Adam back in his roster for the new season.

“I’m looking for a lot of offense from Adam this year. He was able to get over a point a game and lead the team in scoring. He is only 21 years old so hopefully he has gained a lot of confidence to keep improving.

“I’ve heard he is a good skater and a really good teammate. I want every player working hard in both ends of the ice and he fits the bill as a go to player for us this year.”