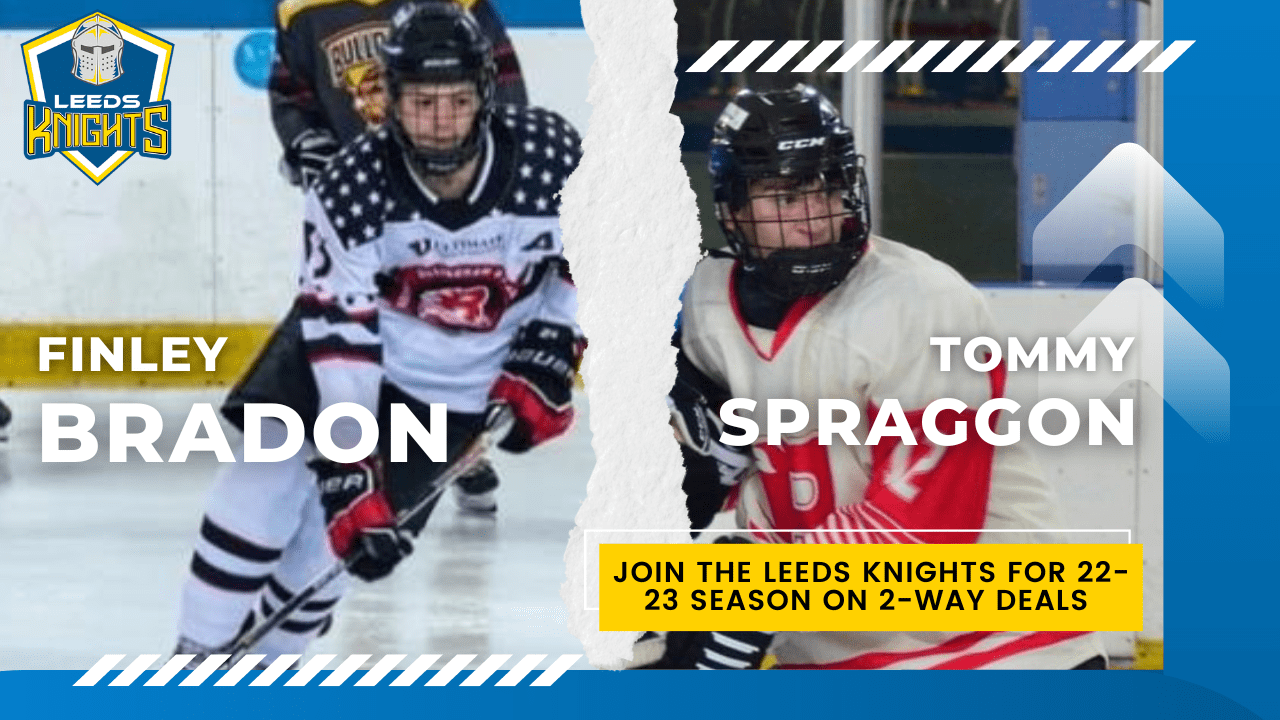 Bradon and Spraggon join the Knights ahead of 22-23 season!

Finley Bradon and Tommy Spraggon will be joining the Knights for the 22-23 season, and Head Coach Ryan Aldridge is excited with the development system in place along with the Billingham Stars – “Thanks to Billingham for allowing both guys to continue their development here in Leeds when the schedule allows, I’m excited to get going and to work with both of them.”

Ryan described Bradon as a ‘Very skilled player with a bright future’, Finley is a dynamic forward capable of playing on the wing or up the middle and turns 17 in November. Last season saw Finley break into the Billingham Stars NIHL 1 side on 16 occasions, where he scored 7 goals and grabbed 7 assists – logging just under a point per game. Meanwhile Bradon iced 11 times for the Stars’ U18 side and achieved a whopping 42 points in just 11 games while wearing an ‘A’.

Joining Finley at the Knights for the upcoming season, is long-time teammate Tommy Spraggon. Tommy also made his first step up to NIHL 1 last season, but did so 27 times for the Billingham stars, getting 8 points in the process as a defenseman. Spraggon also had an impressive points total for the U18 Stars, with 13 goals and 18 assists in just 12 games. Head Coach Ryan Aldridge sees Tommy as ‘A great young defensive, British, talent that I’m really looking forward to working with’.

Ryan also went on to say – “When I was asking about talent in the North, both of these guys’ names were thrown around time and time again, and I’m looking forward to them hopefully being a part of our future.”

To be Finley’s or Tommy’s Player Sponsor for the season and for all Leeds Knights sponsorship enquiries please email Managing Director, Warwick Andrews at warwick.andrews@leedsknights.com

Own & Loan: You can purchase both of the player’s jerseys now and loan it back to them for the 22-23 season, just go to our online store!