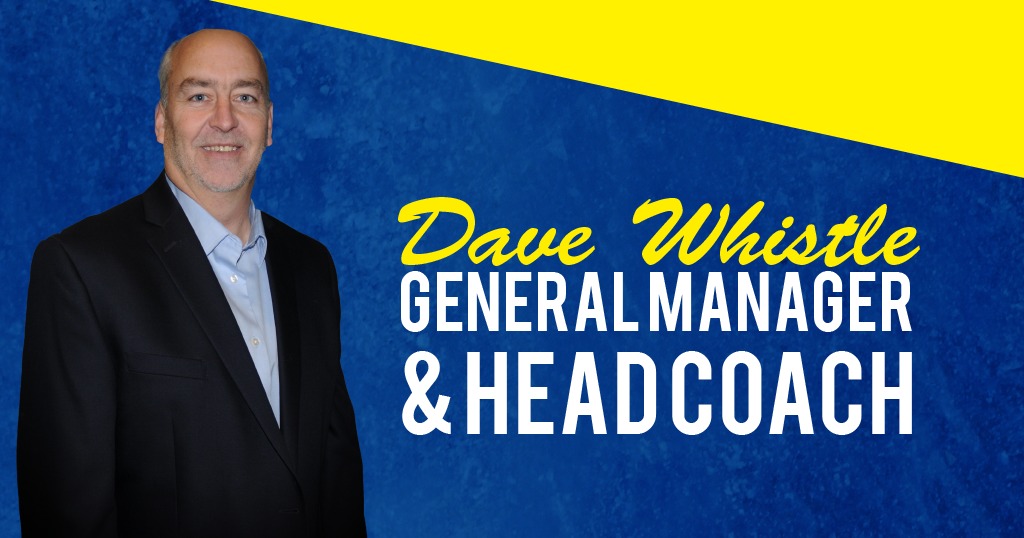 Leeds Ice Hockey Club are delighted to confirm that, after a thorough recruitment process, Dave Whistle has been appointed the new General Manager/Head Coach of the organisation.

The 55-year-old is no stranger to British Ice Hockey having first arrived on these shores from Canada in 1991. His first team were the Billingham Bombers where he scored 110 points in 36 games. The following seasons saw him ice for Romford, Basingstoke and Telford before arriving in Bracknell where he would play the final three seasons of his playing career.

In 1998 he made the move to Head Coach and remained with the Bracknell Bees for a further two seasons. During this time Dave also had spells as the Team GB Assistant Coach through the World Championships and Olympic Games Qualifiers. Heading into the 00-01 season, he made the move to Northern Ireland where he took over the reins of the Belfast Giants, spending three years there before making the move to Germany with the Iserlohn Roosters.

After a spell as the Cardiff Devils Head Coach between 04-05, alongside a brief stint with the Sheffield Steelers in the 05-06 season, Dave returned back to Canada where he coached the Alberni Valley Bulldogs. After a couple of years away from the game he returned to the bench as his career took him through U18 hockey to the Okanagan Rockets U18 AAA side.

In-between his two seasons in Penticton, Dave had a brief return to Wales as Head Coach of the Cardiff Devils in 2014 but his move to Leeds will be his first coaching position in the UK since then.

After a thorough Head Coach search, owner Steve Nell was undoubtedly thrilled to have secured the services for the new campaign. In particular, he highlighted his UK experience and time with Okanagan in Canada as reasons for appointing him:

“Dave is a great fit for our organisation, his previous experience within the UK was a huge factor. We need someone on the ground in Leeds from day one and Dave is that man. He will be responsible for the day-to-day running of the club and is very keen to be involved in building up a club, not just a hockey team.

We had some great feedback from some of the top names in UK hockey regarding Dave, and the most important thing was to get a quality person who knows the UK game and is willing to get stuck into the project we have building in Leeds.”

Speaking after his appointment was confirmed Dave added:

“I’m very excited to get this opportunity to be the Coach/GM. I’m really looking forward to meeting everyone and getting to know the players. I’m also looking to get to know the supporters club as they are a vital part of the club.

My wife and I have always wanted to return to the UK and to be involved in a hockey capacity. I can offer a lot for both pro and junior development, it also helps both my sons (Jackson & Brandon Whistle) are in the UK as well.

The National league is a competitive, well run league. Brandon played for Telford last year so I watched as many games as I could so I understand what the level of play is like. I’m also spending time watching games on YouTube so I can learn even more about the league ahead of September.

I am currently coaching full time at a hockey academy for elite players aged 13-17 in Penticton, as much as this has developed my coaching abilities, I’m ready to get back into coaching pro hockey. I had some great times in the UK before and was able to win a few trophies which I want to do in Leeds.

We’ll build an exciting team to watch and we won’t be outworked. We will try to be fast in all areas of the game, and be aggressive on the puck at all times.  I hope my players and I will be able to meet the fans before the regular season starts and I just can’t wait to get going!”