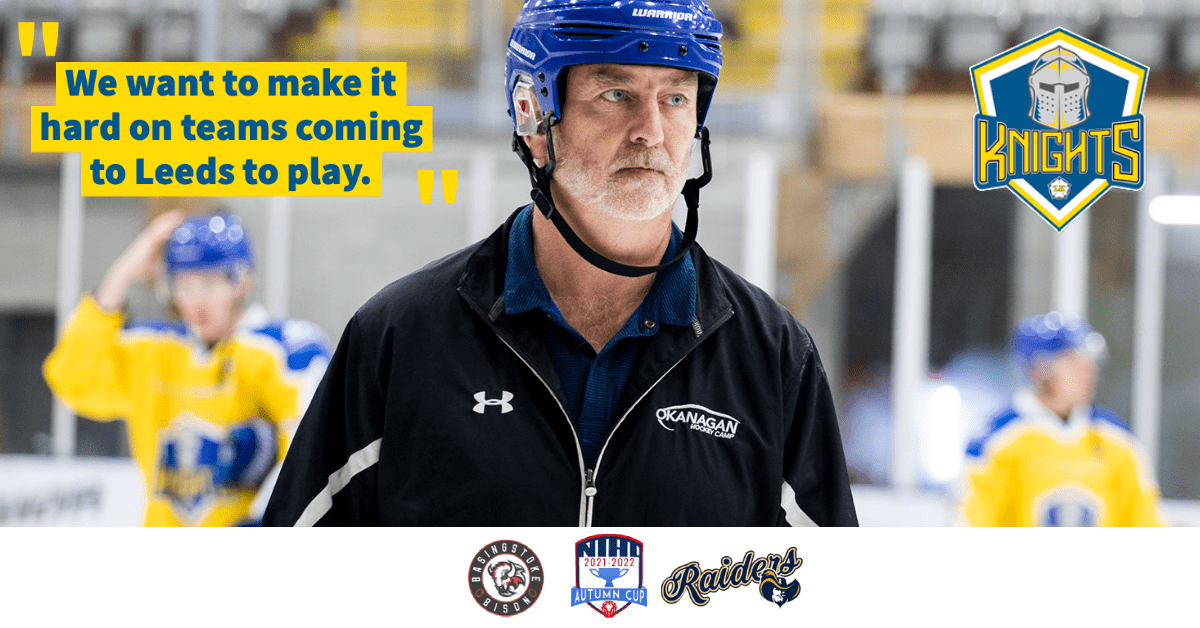 “We want to make it hard on teams coming to Leeds to play” was the resonating message from Knights’ Head Coach Dave Whistle, on his latest assessment of his team’s performance. He looks at their games against the Basingstoke Bison on Saturday 2nd October, before returning home to face the Raiders IHC on Sunday 3rd October.

Head Coach Whistle has been at the helm of the Leeds Knights’ undefeated start to the competitive campaign in the 21/22 season, having won all 3 games they’ve played in the Autumn Cup. Despite having two games this weekend, the Knights are in full focus on Basingstoke and taking games one at a time – With the Bison, Head Coach Whistle has acknowledged their current performance going on to say “They have been playing really well so far and there record proves it.” In order to manage and shut down the Bison, the plan of action is to get ‘a really good start in Basingstoke to put them back on their heels.’ At present, Leeds’ firepower up front is impossible to deny as one of the best in the league, something Head Coach Whistle is very impressed with, the main catalyst of the forward success is speed – “We have good speed up front so we need to use it. Get some early scoring chances and hopefully get on the board early too. We’ve been successful whenever we’ve been able to get a quick goal.”

Sunday’s Home Return For The Knights

Despite the focus on Saturday’s Autumn Cup clash, Head Coach Whistle wants to deliver a big performance for fans during Sunday’s home fixture which sees the Knights take on Raiders IHC. Having had the unfortunate of injury issues early on this season, the Raiders IHC are yet to win a game in regulation as they head into another weekend of Autumn Cup fixtures. However, their overtime last week against the Bison shows the grit and determination of the Raiders team – “Raiders have been in a lot of close games so far so we will have to play a complete game to beat them.” In a similar game plan to Saturday, the speed and scoring ability is going to be integral in the Knights’ attempt at 2 more points this Sunday 3rd, with Head Coach Whistle rallying his Knights to come out of the gates ‘flying’ and take it to the Raiders from the minute the puck drops.

So far this season, the Knights’ young forward core have risen to the challenge and have managed to put great points up consistently. Kieran Brown as an example, has 12 points in only 3 Autumn Cup games, however this week the ‘One to watch’ for the Knights has got to be #86 Brandon Whistle. With 4 goals and 2 assists, for 6 points in 3 games, Brandon Whistle is one of the scoring leaders of the team – but he’s also integral in the team’s defensive successes and his shut-down ability has been incredible. Whistle logs a lot of ice time every game, being a top scorer of the team and a go-to guy on the powerplay. Furthermore, he’s also a key penalty killer when the team is shorthanded! This is an immensely difficult role to fill, but Brandon has so far being doing this game-in game-out.

For the Bison, the Knights will be keen to shutdown high scoring d-man #75 Brendan Baird. Having picked up a goal and assist in the teams marginal defeat last Saturday, Baird will no doubt be pleased with a similar performance, in which he hopes will help his team be on the winning team this Saturday.

The Raiders, who were the victors over the Bison last Saturday, will be looking to take some points off the Knights this coming Sunday. The one to watch from their team is without a doubt #51, import forward Erik Piatak. In the 19/20 season, Piatak put up 59 points in 39 games and so far this season has being producing efficiently! He’s one to watch for both the fans, and the Leeds defense.

Make sure you don’t miss any action this Sunday, you can purchase tickets here.