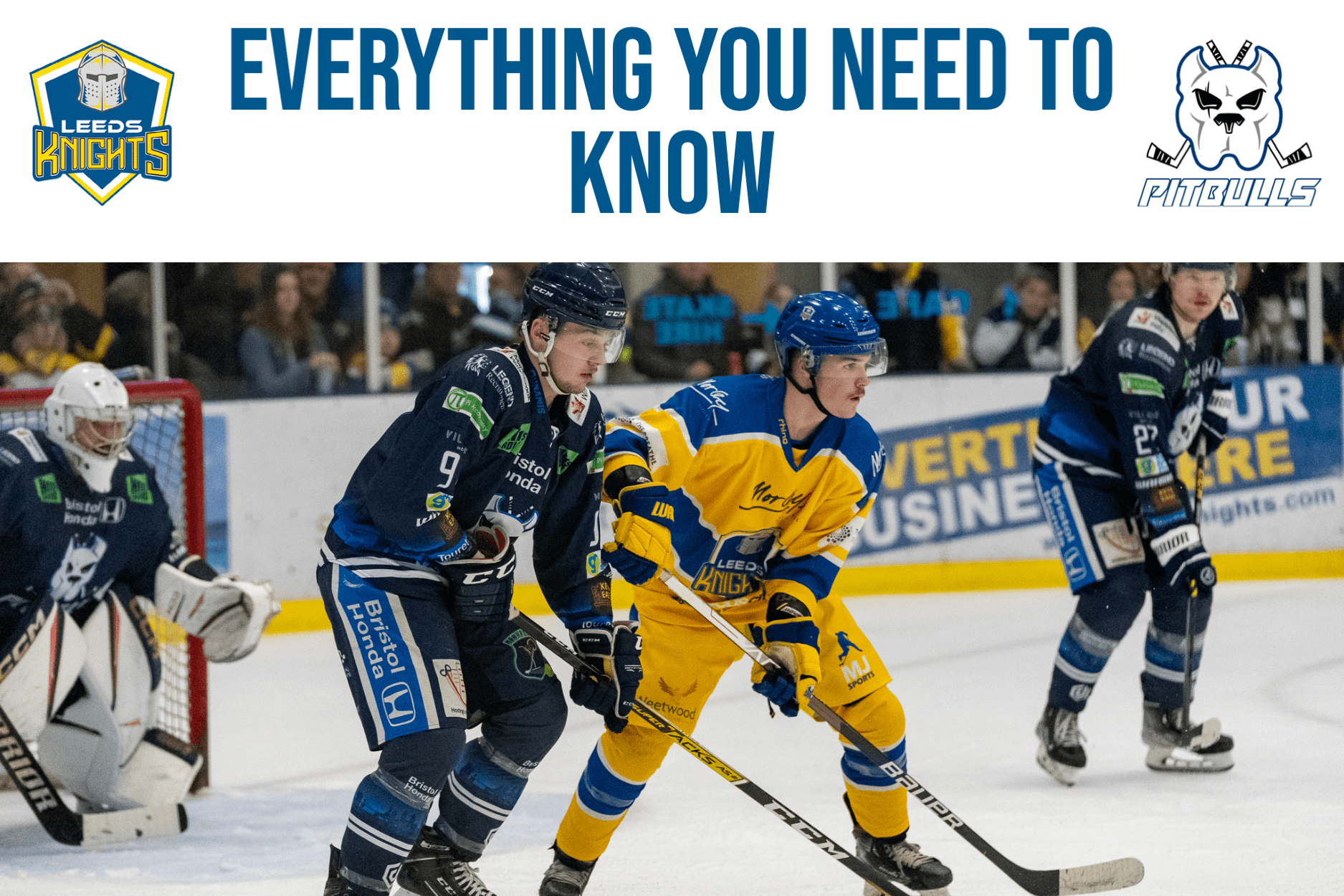 Everything You Need To Know VS Bristol Pitbulls

We faced the Bristol Pitbulls following our 8-1 win in their barn last night, with a clinic being on display by the Leeds Knights forward group, with the goals spread throughout the top 9. Grant Cooper picked up a hat-trick yet again, Carter Hamill grabbed a double, with Mac Howlett and Zach Brooks getting a goal each short-handed and finally Tate Shudra grabbed the 8th and final goal of the night.

Despite the impressive scoring ability on display, the Morley Glass Leeds Knights once again managed to keep a team at bay and stop them from scoring many goals, as we conceded just the one goal. Sam gospel and the Leeds Knights defence have been so integral in the winning form currently, as even without scoring 5+ goals, we have a chance to win night in and night out.

The Ptibulls are in need of wins, as they fight to stay ahead of the charging the Basingstoke Bison, Hull Seahawks and Bees IHC. They sit just 4 points clear of the Bison, who have a game in-hand, with an interesting fight developing for the 8th and final spot in the Playoff quarter-finals in April.

The one to watch for the Bristol Pitbulls is #77 Bayley Harewood. Bayley is a big strong forward, and like many Leeds Knights players, is just off the back of being with the GB U20s. Bayley can make something out of nothing, using his silky smooth hands, big strong body, and his wicked shot – he’s a potential threat every time he’s on the ice.

Bailey only recently joined the Pitbulls, and is on a two-way deal with the Elite League Cardiff Devils, a link-up that should benefit the Welshman throughout his career, as one of the great young talent’s on display in the Planet Ice NIHL National Division.

Bailey was quiet during last night’s game in Bristol, so will be coming up to Leeds with a point to prove, to try and help his team leave the Castle with 2 points as they fight for a playoff spot.

Following his return from the GB U20s, Carter has hit an incredible run of form and being a large part of our 7-strong win streak. He’s grabbed some key goals at big times in the last couple of weeks, including 2 goals against the Bristol Pitbulls last night.

Carter is gritty and grundy and gets to the dirty areas, never giving up on the puck, the play, and always sticking up for his teammates.

Not only is Carter good for putting up points recently, he’s had a couple of fights too, most of the time to protect his teammates and get the boys going!

The post-game signings this Sunday are #10 Carter Hamill, and #41 Oli Endicott, and they will be available following Sunday’s game in the Planet Ice Bar at the signing table. Grab a picture with the guys, get your shirt signed or just have a quick chat!

Shirt Off the Back –  For just £2 you could win your favourite player’s game worn jersey! With two shirts being on offer tonight! It’s a special one, with #9 Grant Cooper and #27 Cole Shdura’s Pride jerseys being up for grabs in today’s competition! The winner of each jersey will be able to collect their prize following our semi-final on the 27th of January.

50-50 Raffle – Feeling lucky? Tonight you could be going home with a massive cash prize with our 50/50 raffle!  The winner of our 50:50 receives exactly half of the proceeds, and at just £1 a ticket why not try your luck?