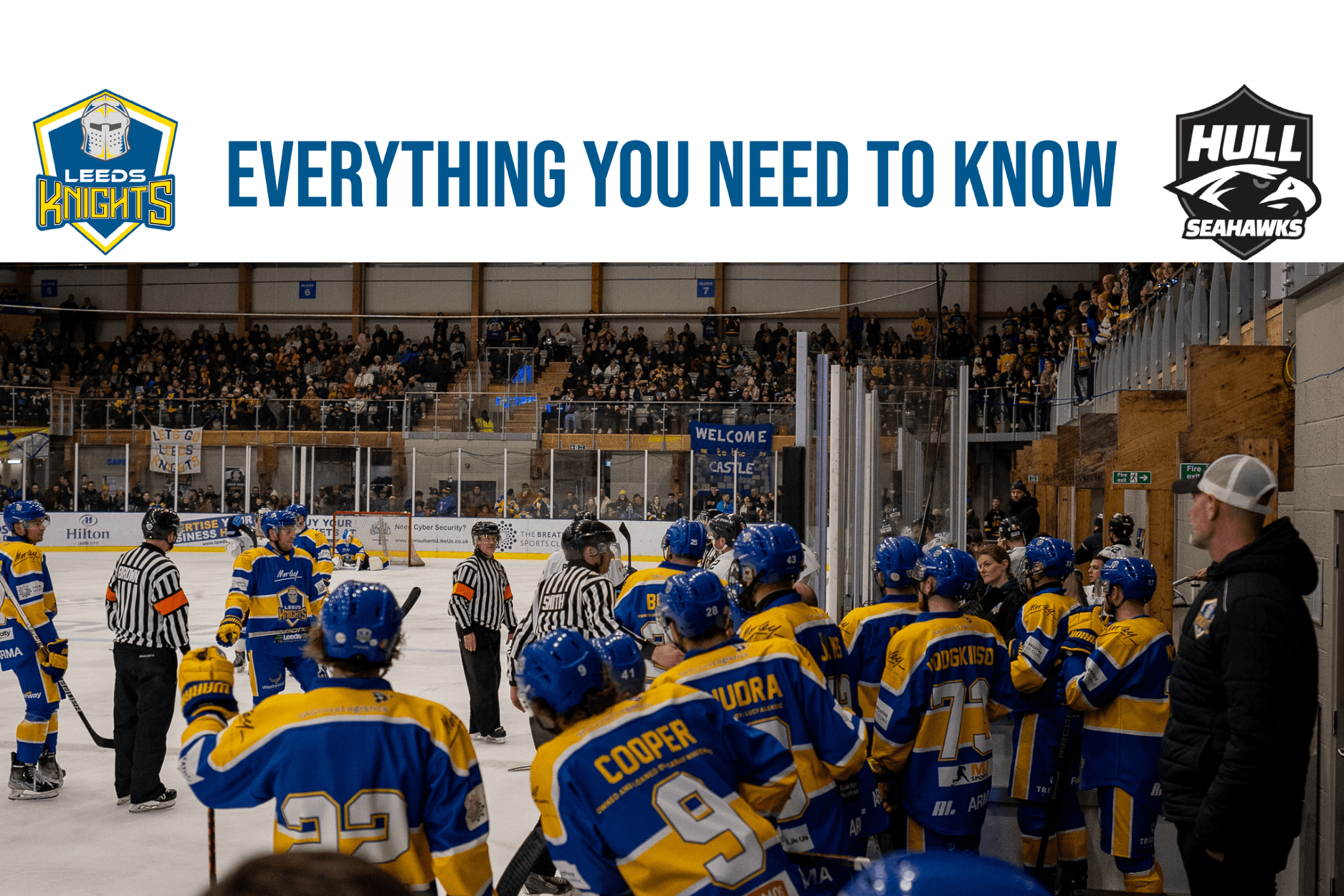 Everything You Need to Know VS Hull Seahawks 1st January 2023

We faced the Hull Seahawks on Thursday night, in a packed Hull Ice Arena, where we managed to return to the Castle with 2 points in the bag after a 4-1 victory, despite it being just 1-0 for more than 2 periods of hockey! Jordan McLaughlin and Sam Gospel in between the pipes for each team had a great game, and stopped almost everything that came their way, including multiple breakaways each. But the goal-scoring prowess of the Knights just proved too much for the hosts over the full 60 minutes.

Games with hull are always an exciting affair, and Sunday will be no different, with more than 1500 tickets sold already, the Castle is going to be bouncing for the boys! Hull are likely to come to Leeds with a similar game plan to Thursday night, and a similar one to what the Steeldogs brought to Leeds as well, a physical, gritty game to wear down this young and hungry Knights core – but the Morley Glass Leeds Knights will be looking to beat the Seahawks once again on Sunday night, for two more important league points!

The one to watch for the Hull Seahawks is #88 Andrej Themar, the sole goal-scorer in our game against Hull on Thursday night in our 4-1 win. Themar has a rocket of a shot, and has two formidable line mates in fellow import Emil Svec and league veteran Nathan Salem.

Themar poses a potential threat every time he hits the ice, which is a lot of the time, as he soaks up big minutes especially in big games. He’s currently playing at a points per game pace of 2, after arriving late into the season.

The Morley Glass Leeds Knights ones to watch this week is… #11 Matt Haywood.

IN recent games Matt has being on the points sheet night in and night out, and scored our opening goal on Thursday night, similar to Themar, and is a steady head that leads the line for the Knights on occasion, with his wealth of experience.

Matty is currently sitting on 48 points through 26 games, and he may have broken the 50-point barrier by the time Sunday comes, and he would be our fourth player to do so this season, with Zach Brooks not too far behind either!

Not only is Matty important with the points he gets, but his ability to penalty kill, win face-offs and calm the team down in tense games and help lead the team to a win, is a massive part of why he’s so important to this Knights team.

The post-game signings this Sunday are #27 Cole Shudra, and #44 Jordan Griffin, and they will be available following Sunday’s game in the Planet Ice Bar at the signing table. Grab a picture with the guys, get your shirt signed or just have a quick chat!

Shirt Off the Back –  For just £2 you could win your favourite player’s game worn jersey! With tonight’s shirt on offer being #27 Cole Shudra!