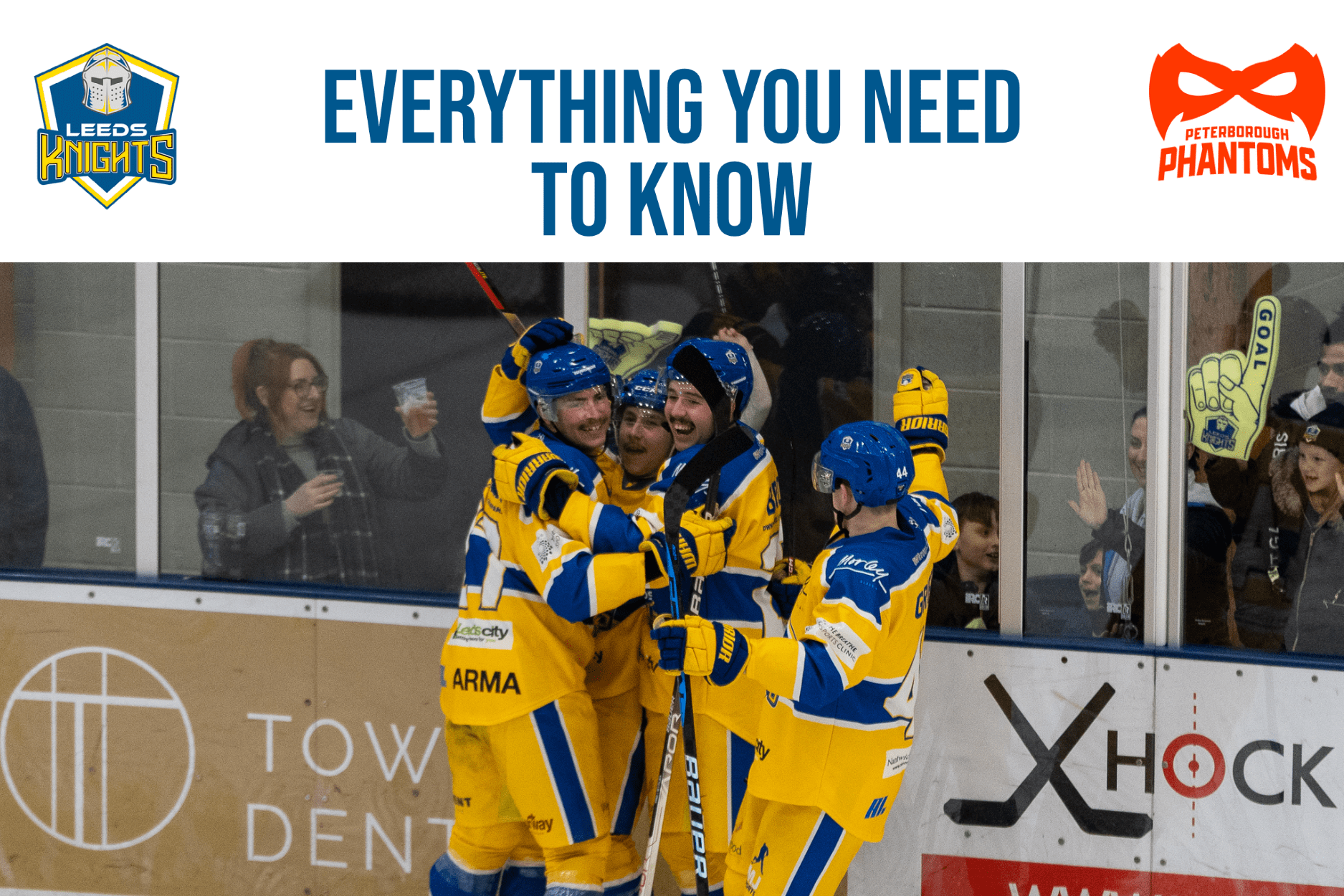 Everything you need to know VS Peterborough Phantoms Saturday 10th December

After our first regulation loss of the season last week, tomorrow’s game is a big one to test the bounce back-ability of the Leeds Knights, and to regain a lead on the 2nd place Peterborough Phantoms – who are the visitors to the Castle this week.

The Phantoms have won their last 10 games in a row, having only lost to the MK Lightning, and ourselves (twice). Meaning they sit in second place on 40 points, only behind us due to the game in hand that we have. All signs point to this game being a big one, with the winner claiming the top spot in the league standings.

Peterborough are dangerous in all zones of the ice, and despite their impressive run recently added Martins Susters, who in his first 2 games last weekend, picked up 1 goal and 2 assists.

The one to watch for the Peterborough Phantoms is their first line centre, Glenn Billing.

Billing is having his best season so far, having logged 41 points in just 22 games, he’s projected to smash the 100-point barrier for the first time in his career – with his previous highest scoring pro year being 57 points in the 2018-19 season.

Glenn Billing has recently gained a role of responsibility in the Phantoms squad, with last season being his first with the letter ‘A’ on his jersey, and so far he’s showing why he’s got the role.

In addition to his 11 goals and 30 assists, he has just 8 penalty minutes in league competition!

The Morley Glass Leeds Knights ones to watch this week is… #6 Ethan Hehir.

With Archie Hazeldine, Oli Endicott, Carter Hamill and Tate Shudra being in Lithuania for Team GB U20s for the next couple of weeks, the Knights are without quite a few players headed into some important games.

This isn’t anything new for Ethan and the Knights, with Ethan sometimes logging more than 30 minutes a game towards the end of last season, as he was 1 of just 2 centres, along with Cole Shudra. Following his return to action recently, Ethan has looked incredible from the jump, and this weekend he needs to play the exact same way if the Knights want to beat the Phantoms and the Raiders!

Despite only having 2 points in 15 games, Ethan is a dynamic player that brings a lot of energy into the line-up, and gives 110% day in and day out, with his points total not being indicative of the quality he truly brings!

#73 Josh Hodgkinson will be at the post-game signing session, Josh will be joined by #11 Matt Haywood in the Planet Ice Bar following tomorrow’s home game, with the earlier face-off of 16:30. You can come along to meet the players, get your merch signed by them and even grab a quick picture!

Shirt Off the Back –  For just £2 you could win your favourite player’s game worn jersey! With tonight’s shirt on offer being YOUR CHOICE!

We also have our 50:50 raffle and Chuck-A-Puck. In our 50:50 you could be going home with a wallet, purse, or pocket full of cash! The winner of our 50:50 receives exactly half of the proceeds, and at just £1 a ticket why not try your luck? If a game of chance isn’t up your alley, buy a chuck-a-puck for just £1 and if you’re the closest puck to Leo’s feet then you will win a family ticket for 4 to a game of your choice! Learn more about match night competitions.