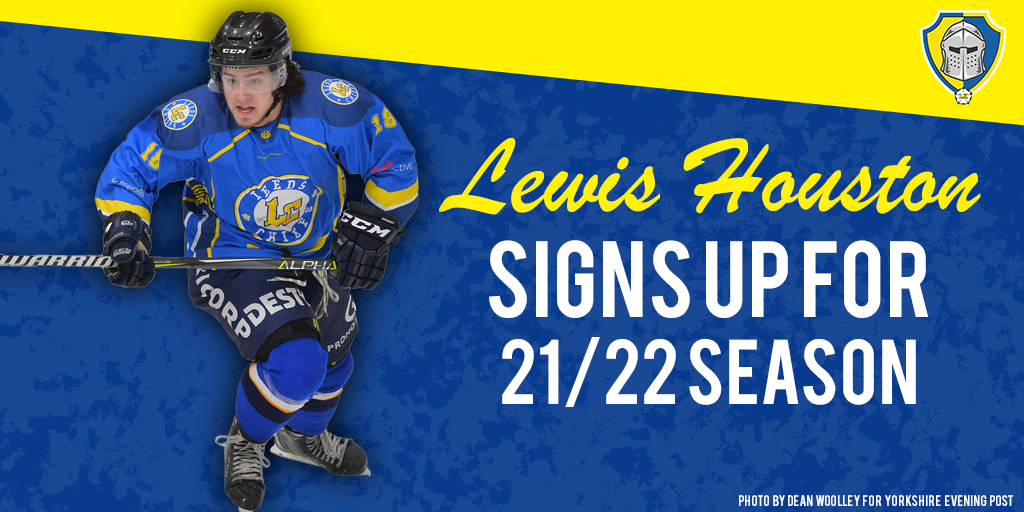 Leeds Knights are delighted to announce that Lewis Houston has re-signed for the club ahead of the new NIHL Season. Lewis joined the club midway through the 19-20 season and had a major impact on the club since the move from Solway.

In just 28 games, he contributed 22 points, with 15 of those coming as goals. At just 20-years-old Lewis still has plenty of time on his side and will continue to have a big impact in the upcoming season.

His career before Leeds was spent solely in Scotland where he graduated through the Solway academy, icing from U16 all the way through to icing for the senior Solway team, the Sharks.

After putting pen to paper, Lewis was thrilled to be coming back to the Knights.

“My heart was always set on coming back to Leeds. It was an easy decision for me because I enjoyed myself so much down there last year. I can’t wait to get down there and try to pick up where we left off.

I’d already spoken to Steve and had signed up before Dave Whistle was announced as coach, and that announcement just confirmed to me even more I had made the right decision.

I think we will do a lot better than our first year, and from looking at the players we already have, we should be pushing for the top spots in the league.

Similarly, Head Coach Dave Whistle was also pleased to have Lewis on board for the new campaign:

I’ve heard a lot of good things about Lewis, he’s a good team mate, an all-round good guy with plenty of scoring in him. He’ll bring loads of offence to the team. He’s a really good addition and gets along with everyone.

He moved down from Scotland and settled in really quickly. This shows how good a team-mate he is and how much he enjoys playing hockey in Leeds. We need everyone to pitch in a little bit because you don’t want to rely on one line.