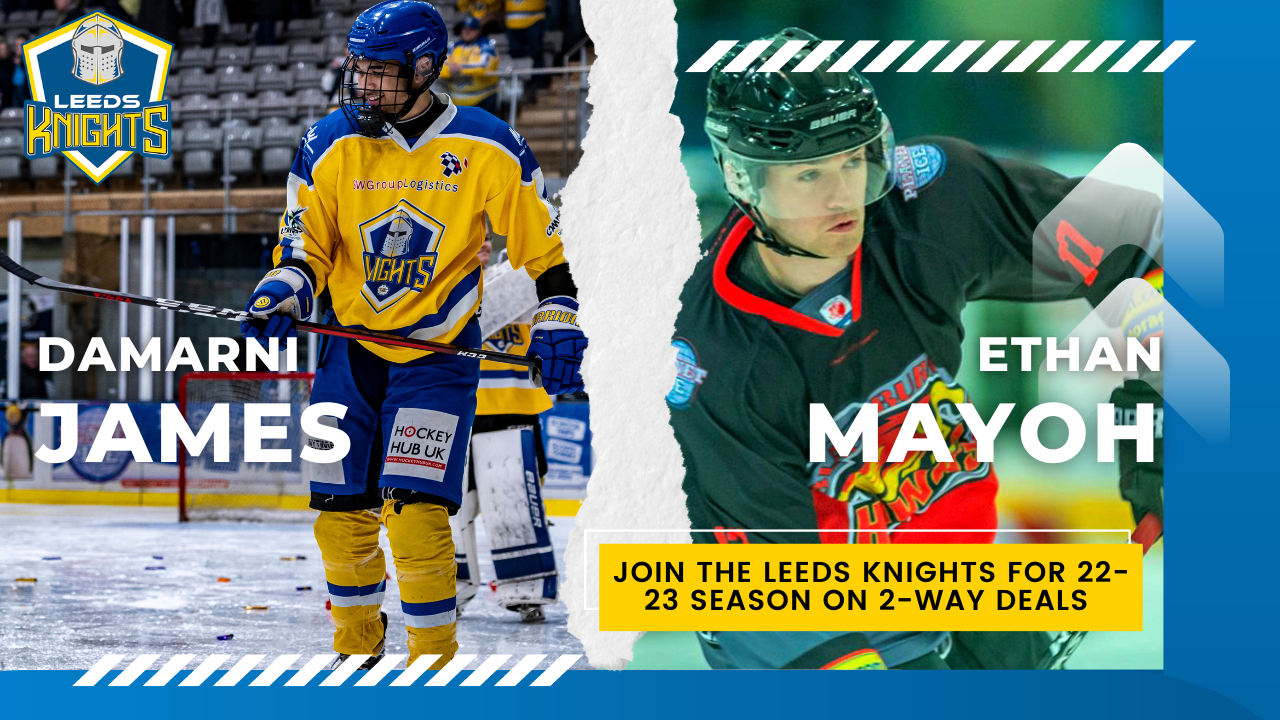 The exciting acquisition of both Damarni James and Ethan Mayoh on 2-way deals is something Head Coach Ryan Aldridge is massively looking forward to ahead of the start of the 22-23 season. Our partnership with the Blackburn Hawks is going to be massively important in the development of British prospects, and the relationship should see it benefit all parties massively.

Damarni iced for the Knights in 2 games in the 21-22 season, jumping into the line-up at the last minute ahead of an away trip to Basingstoke, and helped the Knights to a shootout win! The 2005 born forward is just 17 years of age, and throughout his career he boasts an impressive points per game output at every level, even when playing for higher age groups. In the 21-22 season, Damarni captained the Bradford Bulldogs U18s and scored an impressive 21 goals in just 9 games, picking up 5 assists on the way – and a call up to the Bulldogs senior team where he grabbed another 4 points in just 5 games.

Damarni brings with him a lot of size, physicality and proven scoring ability, all of which Head Coach Ryan Aldridge is looking forward to working with – “He’s a Big, strong power-forward with a great skill set for his size and age, and he’ll be able to turn into a great power forward. He’s got some big pluses to his game and bringing him up to this level will help him grow massively. As he grows I’m hoping he’ll be an even bigger part of our organisation.”

Ethan Mayoh also joins the Knights roster on a 2-way deal. Mayoh won’t be as familiar to Knights fans as James, but he is very familiar with Ryan Aldridge – the pair having history together for Okanagan Hockey Academy UK U18s from 2015-2019.

Ethan is a 21-year old defenceman, with a lot of offensive upside, and has played at the NIHL 1 level for the past 3 seasons, 2 of which were with the Blackburn Hawks. Mayoh joins the Hawks for a third season, and the 2-way deal with the Knights should only see the youngster improve – a development that Ryan is hoping to aide in – “Ethan plays a simple game, but he’s a skilful player. He can join the rush, he’s a great skater. He’s another player that came to our Talent Identification trial and really stood out and working with him to progress, he could be at this level full time in 1 or 2 years.”

“ I’m really happy for these two to join us in our first set of 2-way deals with NIHL 1 teams, and thanks to Blackburn for working with us and supporting the players’ development.”

To be Damarni’s or Ethan’s Player Sponsor for the season and for all Leeds Knights sponsorship enquiries please email Managing Director, Warwick Andrews at warwick.andrews@leedsknights.com

Own & Loan: You can purchase both of the player’s jerseys now and loan it back to them for the 22-23 season, just go to our online store!