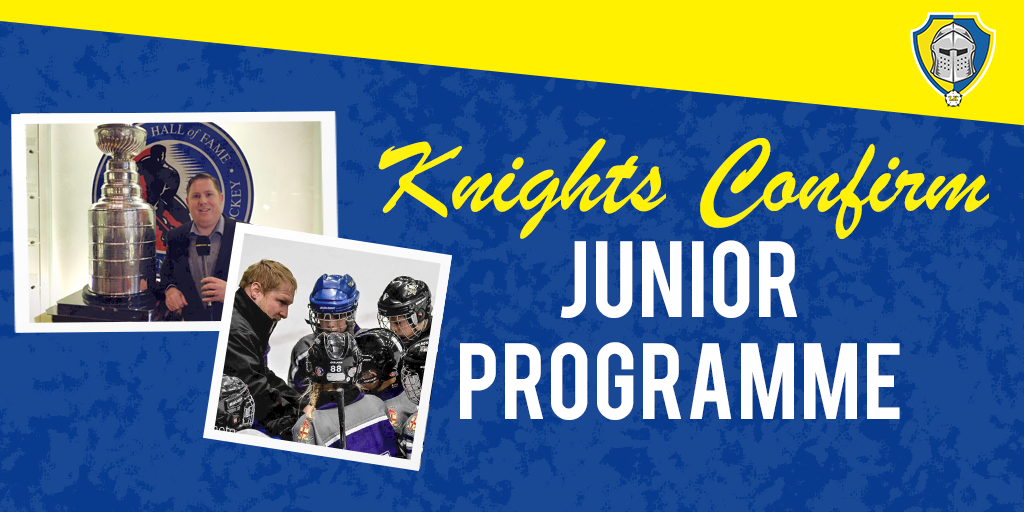 Leeds will have its first junior ice hockey club as the Junior Knights are preparing to play in the 2021/22 season. The Club is welcoming players for open trials on 11th and 18th July at the Planet Ice rink, Elland Road. Knights’ owner Steve Nell said, “I am absolutely passionate about developing players in Leeds and it has always been the plan for us to establish junior hockey here, so there is a player pathway from first stepping on the ice to playing for the NIHL Knights.”

“We want to have strong roots in the community. That means getting people into the rink in Leeds and getting them to experience ice hockey, whether that is watching a Knights game, or deciding they want to play, and so having a junior club is imperative.”

Knights’ head coach Dave Whistle has spent the past five years coaching youngsters at the Okanagan Hockey Academy in British Columbia and is looking forward to putting his stamp on the junior development programme in Leeds.

“I’m excited to get involved in that side of things, to see young players come through in Leeds, enjoy playing the game and become the best players they can be. We have all watched Liam Kirk’s success after he was drafted to the NHL, wouldn’t it be great if we could have a Junior Knights player follow in his footsteps.”

Former Kingston Sharks and Hull Pirates coach Mike Forbes has been named as Junior Knights Head Coach. Forbes brings a wealth of experience, having coached in Hull for the past 16 years and also on the Elite Player pathway coaching the EIHA Northern Conference.

“This is an amazing opportunity to be involved in a new club on day one, and to be working with people like Dave Whistle to develop the best players we can is really exciting. We have a lot of hard work to do, but I am excited and confident that we are going to build a great programme in Leeds that will increase the number of junior players in the North and help them fulfil their potential.”

“I love being on the ice and coaching. I know with the team of people we have on the ice and behind the scenes, this is going to be a fun place to play hockey where we will work hard on skill development at all levels so they are ready to play today’s game.”

The Junior Knights will be run by Chairman Seth Bennett, who was instrumental in establishing the Manchester Storm Academy. “I had a couple of conversations with Steve Nell and it became clear we both feel really strongly about junior development and were excited at the prospect of setting up a new club. We have a wealth of experience between us in junior hockey; together we want to provide one of the best and most progressive programmes in the country and an environment where kids will enjoy playing one of the fastest and most exciting sports in the world.

Leeds is a big city with a proud sporting heritage. I’ve no doubt that there is room for hockey at senior and junior level and I can’t wait to get to work developing great young athletes and hockey players.”

If you are interested in joining the Junior Knights, come for our first open trial on 11 July, 6.30pm – 8.00pm at Planet Ice, Elland Road. We are initially recruiting for players born in 2006, 2007, 2008, 2009, 2010, 2011 to play  next season, however we welcome players from other year groups at trials and will grow the junior section as quickly as we can. All players need to be wearing full ice hockey kit. For more information and to register for the trial please email: juniors@leedsknights.com or joins on teamapp