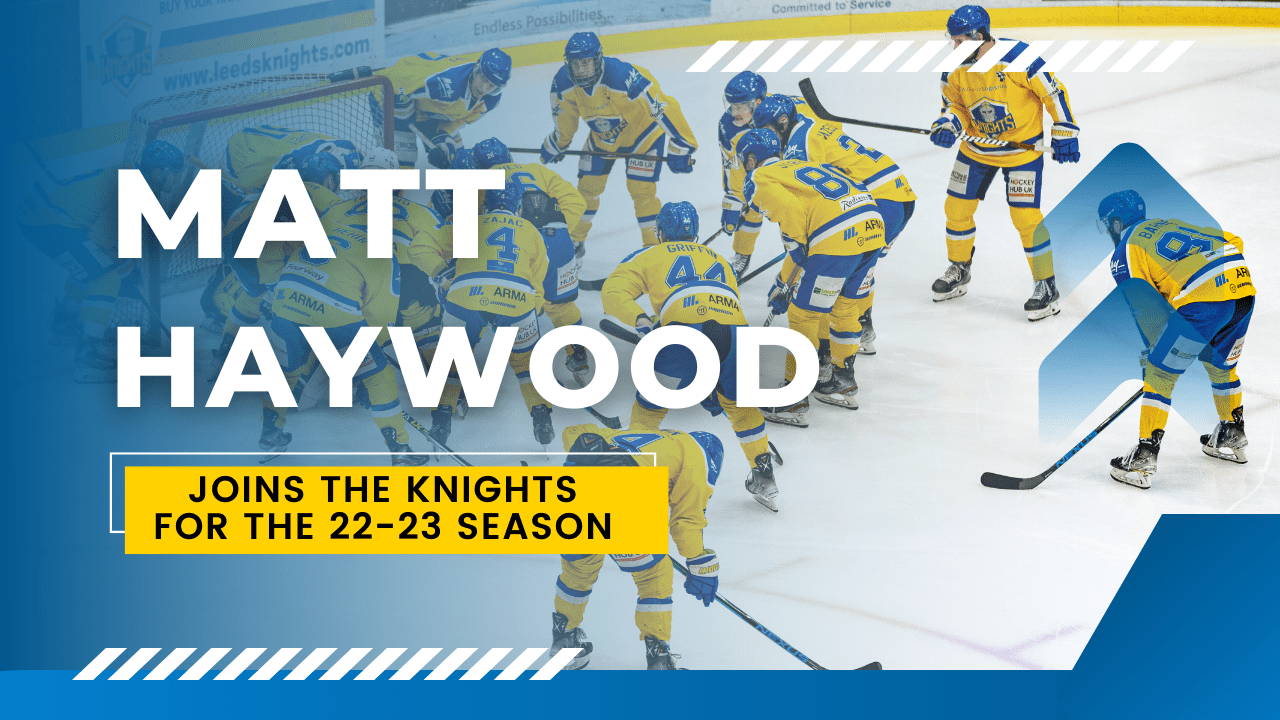 The Leeds Knights fifth piece of the puzzle – Matt Haywood!

The Leeds Knights are extremely excited to announce the fifth signing for the 22-23 season, Matt Haywood!

The 31-year-old left-handed Centre hails from Doncaster, and brings with him an incredible amount of experience, skill and talent – all of us here at the Knights can’t wait for Matt to join us as the start of the season grows closer and closer. Matt joins us from the Glasgow Clan, where he has spent the last 11 seasons totalling over 640 games in the Elite League!

We caught up with Matt earlier in the week, and he’s already expressed his excitement of getting things going with the Knights this September – “I’m very excited about getting going with Leeds. I feel like it’s a breath of fresh air for me at this stage of my career, I’ve heard nothing but good things about the team and how loud the fans are so will be great to experience it for myself.”

Haywood hasn’t just played more than 600 games in the Elite League, but he has also been part of the leadership team at his former team – the Glasgow Clan. Matt has served as both the Alternate Captain and Captain for the Clan over the course of the last 3 seasons, this previous experience and leadership is something that Matt is looking forward to bringing to the Knights. When asked how important that is, and if he’d want to take on that role with the Knights, Matt had this to say – “That’s a major reason why I signed, when speaking with Aldy he made it clear that he wants me to use the experience I’ve had to help the younger guys on the team. This is something I take pride in doing, there’s is nothing more I get a buzz from than helping the younger guys and help give them confidence so they can grow into players they want to be.”

With this announcement, Matt becomes the fifth player to have signed with the Knights for the 22-23 season, but he’s already familiar with two players that have re-signed, having played with both Lewis Baldwin and Sam Zajac during their time at the Clan! Matt’s relationship with Sam has been another factor into his move to Leeds, as well as having the best fans in the league! On the pair’s relationship, Haywood had this to say: “When he (Sam) came to Glasgow our friendship grew and I’m still really close with him now. He was a big reason why I came to Leeds. He spoke very highly of the club, how it’s run, how good the fans were so I’m excited to just come and get going and experience it all for myself. I’ll also get the chance to bring my family down and experience more of Yorkshire than normal so I’m looking forward to that.”

As you can see, not only are we excited to be having a player as talented and experienced as Matt Haywood joining us for the upcoming season, but Matt is equally as excited about joining us come September time! You can join Matt and the rest of the Leeds Knights by grabbing your season ticket for 22-23 here. Don’t forget, stay tuned on our social media channels for any and all upcoming announcements and signings!