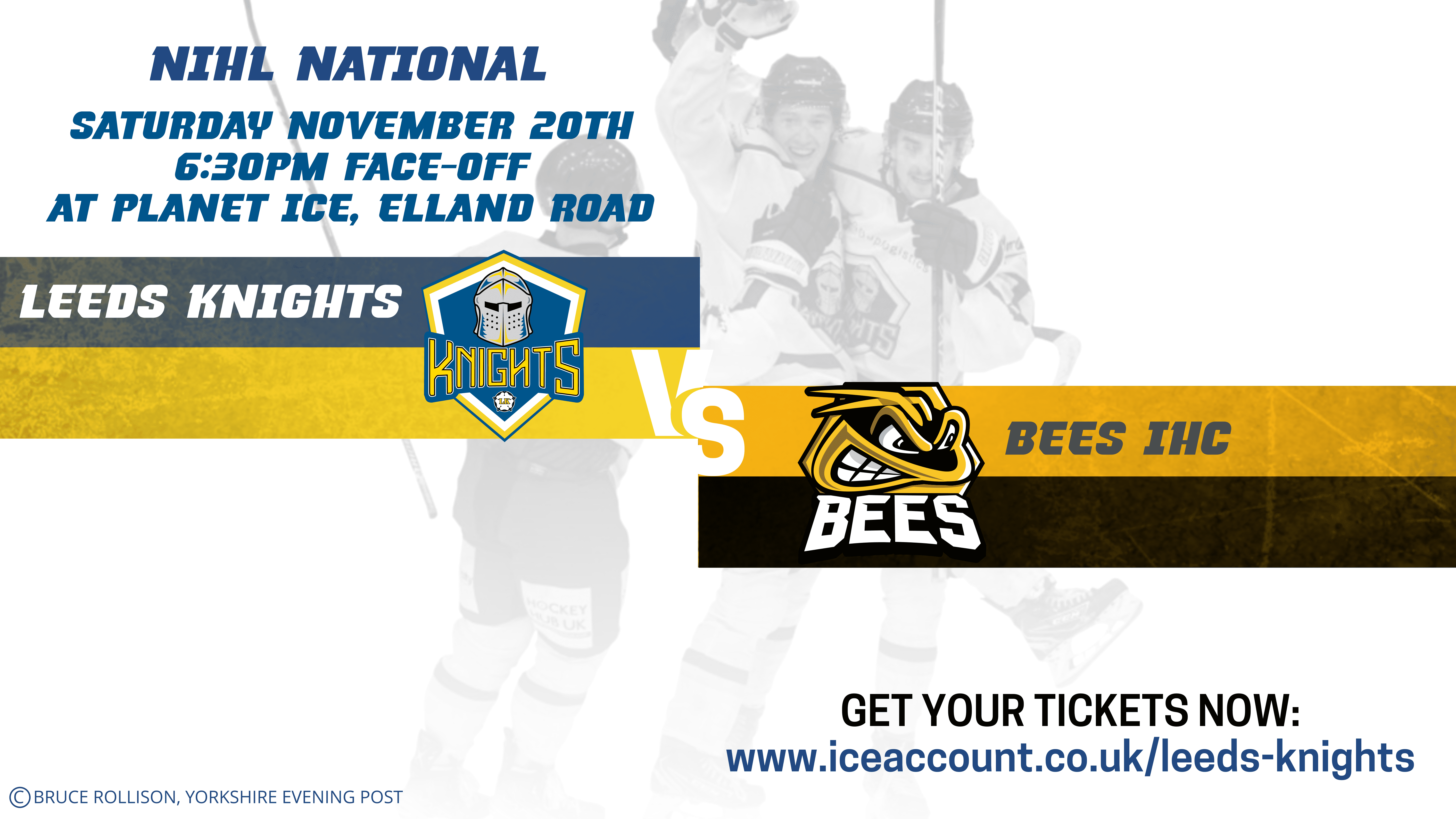 This Saturday, the Leeds Knights host the Bees IHC as another week of league competition commences. As always, the evening will be full of fast-paced hockey, fun competitions to take part in and a great evening of ice hockey! After 8 days off, the Knights are raring to go and we can’t wait to try and get another 2 points in the league.

The last time we faced the Bees, was the 31st of October where the Knights made the journey to Slough as the Bees hosted us in their Halloween game. A short-benched Knights team, having recently lost starting netminder Sam Gospel in addition to other injuries, put up a valiant effort that the team just fall short.

The final score of the game was 5-2 in favour of the Bees, despite the result, the game saw Carter Hamill on loan from the Elite League’s Belfast Giants score his first goal for the Leeds Knights, assisted by long-term linemate Mack Stewart. The performance by the two Belfast Giants youngsters, along with increased ice-time for another u18 player in Archie Hazeldine is still immensely valuable even though the result wasn’t in favour of the Knights.

Since this game and throughout November, both teams have had an interesting journey. We’re still only a week on from the Knights’ historic week as we beat the Sheffield Steeldogs to secure our place in the Autumn Cup Final. Our quest for the cup continues in our first ever season. On Wednesday night, following on from their victory against the Telford Tigers, we learned our Autumn Cup Final opponents – The Swindon Wildcats.

However, despite the overwhelming success in the Autumn Cup, our recent dip in league form is something we are looking to bounce back from against the Bees this weekend. Every two points matters, and our focus is all on Saturday’s home game to add these two points to our league tally.

For the Bees, the last victory they had was in fact the aforementioned 5-2 win over the Knights. November has proved to be unkind to the Bees, as they narrowly lost to the Bison 7-6 and were shutout by the Swindon Wildcats the following night. Last week the Bees had a home and away double-header against the Milton Keynes Lightning, a point-less weekend for them as the Lightning won by two goals each night.

Both the Bees and the Knights sit on 6 points in the league, which makes Saturday’s clash even more important as both teams look to take two points from their current league table rivals. The stage is set for Saturday, and there’s no doubt that there will be a lot of goals, a lot of tension and a great atmosphere… but there will only be one winner!

Tickets can be purchased here.