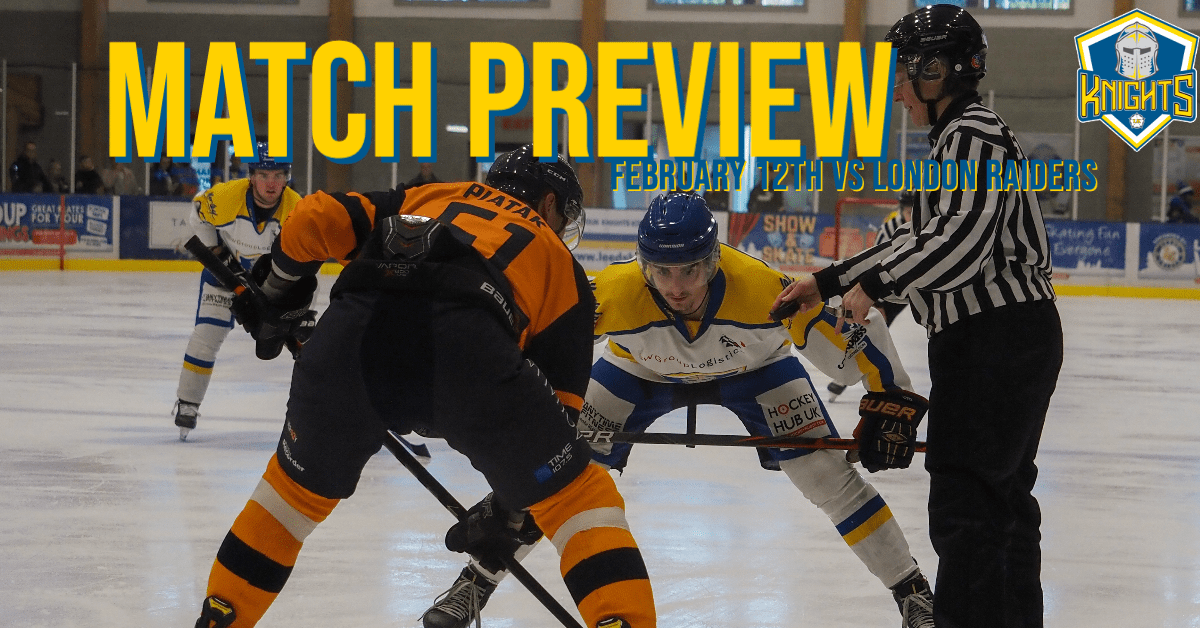 Off the back of last weekend’s home double header, the Leeds Knights are at home once more! Tonight sees the London Raiders come to Planet Ice Leeds for the last time this season in league competition.

With 44 goals scored in the last 5 meetings between the Knights and the Raiders, an insane amount of action is almost guaranteed tonight! Our previous meeting with the Raiders saw us beat the home side in convincing fashion, as we left London with 2 points after a 6-1 victory.

However, the Raiders have beat the Knights on 3 out of the 5 occasions, and as we approach our 6th game against them tonight, the past won’t matter as anything can happen in hockey.

The Raiders have struggled recently, having only won a single game in their last 5, this game being against the Bees who sit 1 point in front of them in the league table, as the two teams tussle over the final playoff spot. London will be looking to come into this game looking for another 2 points and with beating Leeds at home in overtime on their last visit, and beating us the time before as well, they may fancy their chances at Planet Ice Leeds.

After last weekend’s games, the Knights will be keen to get back into action and provide a win for the hefty crowd expected for tonight’s game. After a hard loss to Basingstoke Bison last week, following Saturday night’s gruelling victory against the Phantoms, these 2 points are even more crucial.

Heading into this weekend, the Knights sit in 5th place just 3 points behind the Sheffield Steeldogs, who have a game in hand on the Knights, meaning that a win could see us close the gap to 4th place to just a singular point. Sitting in 6th, behind Leeds is tomorrow’s opponent, the Peterborough Phantoms, meaning that both games this weekend are crucial in our play-off push as the season end grows closer and closer every week.

At tonight’s game, the Raiders have a different goalie to normal, with Ethan James’ recent injury preventing him from playing, and their back up Brad Windebank struggling with injury too, Michael Gray and Tyler De La Bertouche are the goalie tandem expected to make the journey to Leeds today.

The players to watch for the Raiders are playmaker Erik Piatak, who last week against the Bees logged 3 assists, Piatak is a 6’1” import from Slovakia and has maintained an above 1 point per game statistic almost everywhere he’s been, including the UK. The forward duties are shared by the Raiders, though, with Lukas Sladkovsky another one to watch as he delivered the fatal blow to the Knights in overtime earlier this season.

All in all, anybody that is at tonight’s game should expect a whole heap of action, in what could be a battle of the defence, with 44 goals in 5 games, how many can we expect to be scored tonight?!

Get your tickets here and don’t miss out!