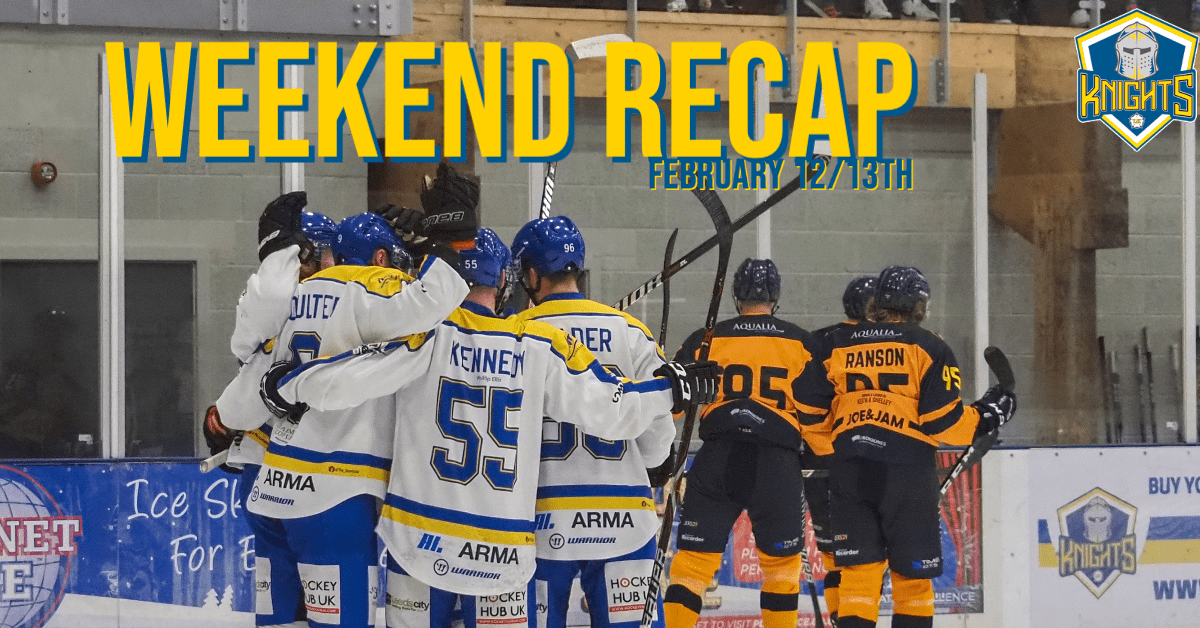 16 February 2022
LEEDS KNIGHTS posted a perfect weekend to keep the pressure on the NIHL National top four with a maximum four-point haul.
A comprehensive 7-3 win over Raiders IHC on Saturday night on home ice was followed by an equally-impressive performance on the road on Sunday as interim head coach Ryan Aldridge’s team took both points off Peterborough Phantoms in a 3-1 triumph.
The weekend was also a memorable one for forward Kieran Brown as he burst through the 100-point barrier for the season when posting a four-point night in the win over Raiders.
In their third straight home game, the Knights responded to the previous Sunday’s defeat to Basingstoke in positive fashion against a Raiders team who had lost five of their previous six.
But Sean Easton’s side had proven on previous visits to West Yorkshire how dangerous they could be and went into the game having beaten Bees 5-2 the previous Sunday.
However, there was little prospect of that being repeated after they found themselves 3-0 down at the end of an excellent first period by the Knights.
Lewis Baldwin got the ball rolling at 3.43, Brown’s landmark moment coming at 18.02 when setting up Adam Barnes to make it 2-0.
Cole Shudra extended the lead with 10 seconds remaining and although Aaron Connolly reduced the deficit with a shorthanded marker at 26.05 the Knights were 5-1 to the good after 40 minutes through two Matty Davies strikes.
Two goals in three minutes from Jake Sylvester gave the Raiders hopes of a comeback, but those quickly disappeared when Brown responded within a minute of Sylvester’s second goal to restore the hosts’ three-goal lead. The 20-year-old former Sheffield Steelers’ winger then made it an excellent four-point night with his second of the game at 55.24.
On Sunday, it was a double from Brown’s former Bradford Bulldogs’ team-mate Barnes which proved key to the Knights’ success.
Barnes opened the scoring at 21.21 but the teams entered the final 20 level after a 29th-minute reply from Glenn Billing.
The crucial go-ahead goal came in the 51st minute, however, Barnes doubling his tally for the night before Shudra made sure of the win with an empty-net marker with just 40 seconds remaining.
To read match reports, interviews, features and all the latest Leeds Knights news, head to the Evening Post website at: https://www.yorkshireeveningpost.co.uk/sport/other-sport
Posted in Latest News