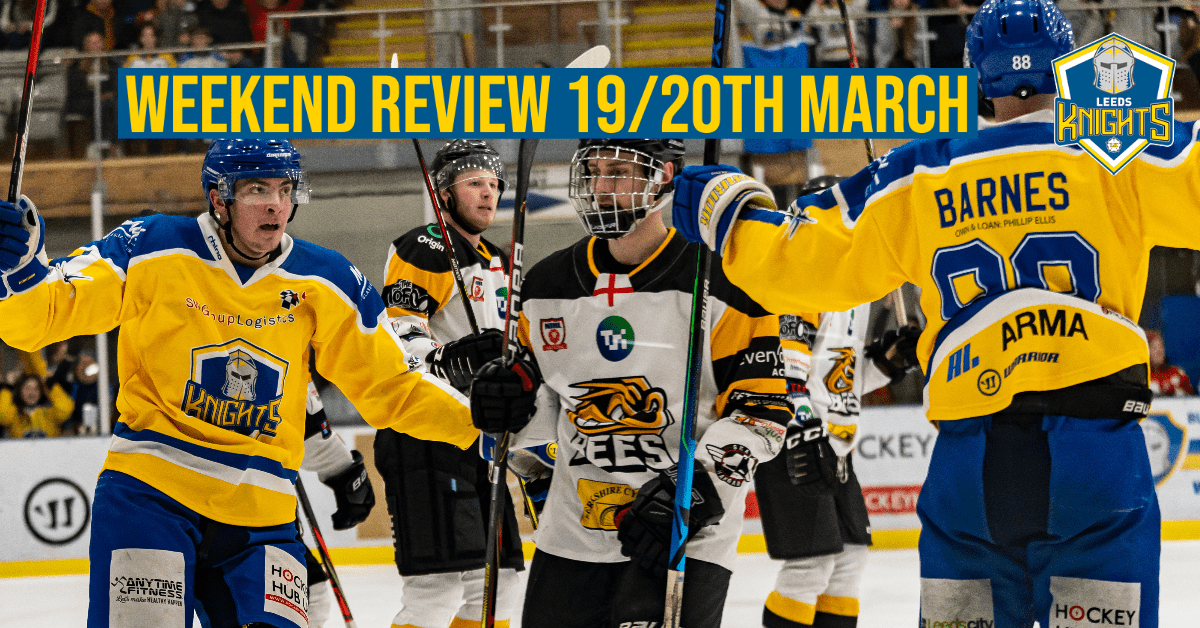 KIERAN BROWN chalked up another milestone in a Leeds Knights jersey for the 2021-22 NIHL National campaign, breaking through 50 goals for the regular season at the weekend.

With Telford Tigers only needing a point to confirm their retention of the regular season championship, focus is concentrated on the race for second. As it stands, with four games remaining, four points separate the top two, Swindon Wildcats currently sit in second spot on 55 points, with Sheffield Steeldogs four off in fifth place. In between, the Knights and Milton Keynes Lightning are tied on 52 points.

The Knights’ hopes took a slight knock when they were beaten 6-2 by champions-elect Telford Tigers on Sunday night, although Ryan Aldridge’s team still took two points from the weekend having beaten play-off chasing Bees IHC 6-5 at Elland Road on Saturday.

It was a game which served up another reminder of just how crucial Brown has been since the first puck dropped back in early September, the 21-year-old forward’s latest landmark moment arriving with 35.25 on the clock, when a shorthanded strike handed him his half-century of goals in the league.

Overall, Brown is league-leading in every way possible, boasting a remarkable tally for the overall season of 129 points in just 56 appearances, 68 of which are goals.

On Saturday, the Knights were made to work hard for the full 60 minutes to clinch both points against a Bees team fighting desperately for the eighth and final play-off spot. The first two minutes of the third period proved the key moment when the Knights scored twice in 46 seconds, Brown completing his hat-trick at 40.55 before Lewis Baldwin doubled his tally for the night.

William Stead completed his own hat-trick when making it a one-goal game again inside the last five minutes, but the Knights held out.

Earlier, the two sides had traded goals back and forth in the first 40 minutes. Brown, at 13.26 and then Baldwin just 52 seconds later, put the Knights in control, only for Doug Sheppard’s team to haul themselves level before the first break through a Stead double.

The visitors then went ahead early in the second through Dominik Gabaj, the in-form Adam Barnes equalising just after the halfway point before Josh Martin made it 4-3 at 32.00

Brown’s milestone 50th league marker with the Knights shorthanded levelled matters again, before the hosts struck the match-deciding double early in the third to ensure they remained in the hunt for second spot.

In Shropshire, Tom Watkins’s Tigers’ team showed why they are destined to retain the regular season title they first won in the second-tier’s inaugural 2019-20 campaign, before the global pandemic brought everything to a standstill.

The Tigers were 3-0 ahead before the Knights were able to respond, Bayley Harewood, Vladimir Luka and Jack Hopkins all finding a way past Sam Gospel.

Brown – who else? – responded for the visitors at 26.08 but it wasn’t long before the hosts’ restored their three-goal advantage through a second for Haywood.

The game was effectively over as a contest before the second intermission, though, Luka and Hopkins both matching Harewood’s tally, with Brown’s own second of the night just 24 seconds into the third completing the scoring.