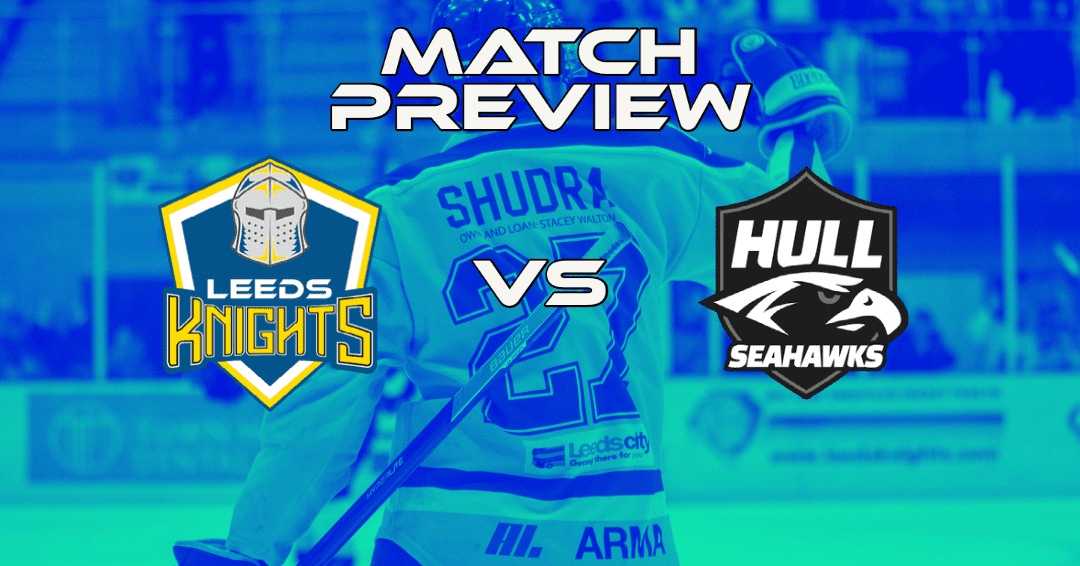 Tomorrow night is officially hockey night once more, as the Morley Glass Leeds Knights host local rivals, and new team to the league, the Hull Seahawks!

Saturday the 3rd September will be the Leeds Knights’ first home game of the 2022-23 season, and our second game in the Yorkshire Cup, following tonight’s trip to Sheffield to take on the Steeldogs.

The Seahawks are one of two teams joining the Planet Ice NIHL National Division, with the Bristol Pitbulls making the jump up from NIHL 1 – and we can’t wait to face-off against both outfits.

Tomorrow night will be the first EVER time we face the Seahawks, and Head Coach Ryan Aldridge will be looking to start off with a win at home – there’s no doubt about that. It’s been a heavy week of preparations for the Knights, and the Seahawks will be fresher when the teams meet on Saturday, having not got a game tonight.

As well as Hull being one of the closest teams to the Knights, the off-season resulted in many moves that will see familiar faces return to Leeds in a different team’s jersey…

First of which is GM of Sport and Player-Coach Matty Davies, who returns to his home-town team. Long-time Hull player, Jordan Fisher also returns to Hull, with Bobby Streetly moving across Yorkshire to join the Seahawks. The Seahawks have also bolstered their forward lines with big names from around the league, Nathan Salem (13G, 11A in 29G) and Emil Svec (36G, 25A in 61G), as well as Andrej Themár who makes his return to Hull after his one season with the Pirates in 2016-2017, where he logged an impressive 52 goals and 43 assists in just 51 games!

Despite Hull’s bolstering of their forward group for their inaugural season, the Knights match them incredibly well in this area. The addition of the Canadian import duo of Zach Brooks and Grant Cooper, as well as Matt Haywood who comes to Leeds after 13 seasons in the EIHL – is something you won’t want to miss when they all ice for the first time at Planet Ice Leeds.

As important as the additions are, the retention of a majority of the 21-22 roster could be massively integral to the Knights’ performances, with players like Sam Gospel, Sam Zajac and Kieran Brown all set to return to the Castle this Saturday night.

Let’s get the rink rocking for the return of the Leeds Knights, get your tickets here!