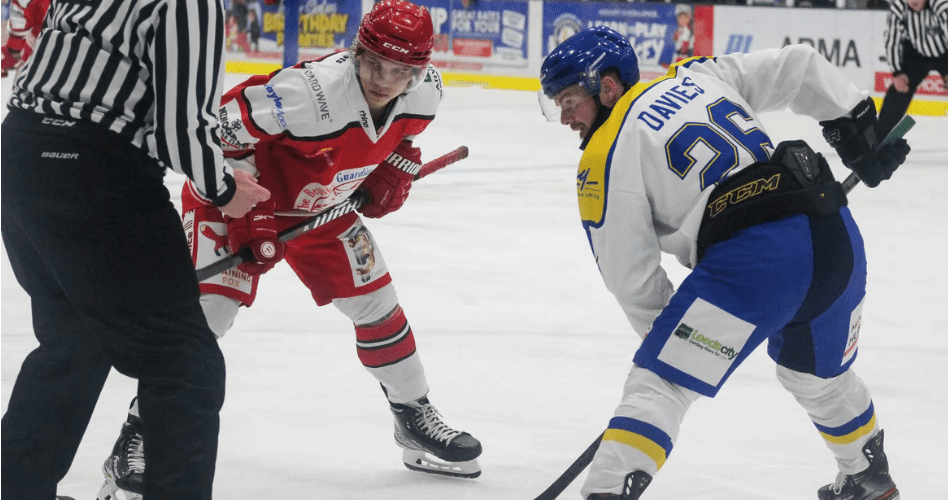 Ones To Watch Leeds Knights VS Swindon Wildcats

This weekend, the ‘One to Watch’ for the Leeds Knights is #26 Matty Davies. In his return last week, Davies recorded a 5-point weekend of 2 goals and 3 assists, kicking off his league point-scoring campaign exceptionally well.

If Davies can keep up this pace, or even a resemblance of this in the coming weekend and further through the season, he is going to prove to be one of the great threats in the NIHL. At this point, it is too soon to say of course, but throughout the first two league games as well as the Autumn Cup games Davies played, goals and assists were never too far behind him.

Davies is very familiar of having the role as a top point scorer, in 25 games played in the NIHL with his former team the Hull Pirates, he had 57 points for a 2.28ppg average. However, this isn’t his most impressive outing as in the NIHL 1, again with the Pirates, Matty managed to bag 44 goals in 48 games and a monumental 141 assists (over 2 seasons), for a 3.85ppg average. In 2018, he was awarded the title for NIHL 1 North Most Points (117) and Most Assists (86).

Prior to his stint with the hull Pirates, Davies played for the Hull Stingrays in the Elite league, as well as the Manchester Storm. Matty captained the Stingrays in 2014-2015, and the Storm in 2015-16, and has a total of 300 games played in the Elite League.

In his current form, and based on his past scoring abilities, Davies will be looking to score some more this weekend, as we take on the Swindon Wildcats.

For the Wildcats, newly signed import Emil Svec is their One to Watch. Hailing from the Czech Republic, the Knights have not yet faced Emil, as he has come into the season a bit later. However, in his first 7 games with Swindon, Svec has proved he can hit the back of the net time and time again, scoring 8 goals and a singular assist.

Emil Svec is 6’4”, 92KG forward with immense scoring capabilities that he’s already displayed. Svec even got a hat-trick and was integral to the success of the Wildcats late into their Autumn Cup run. A massive team effort was required to qualify for the semi-finals for the Wildcats, even having to rely on other results at stages, but the team found their will and found a way – Svec being a massive part of this.

The 27-year-old has played out the rest of his career in Poland for the last 3 years and prior to that, he competed in Slovakia for 3 seasons. In Slovakia, Emil played 92 times and only scored in 7 of those games for a total of 17 points. He has currently beat that tally of goals in 7 games with the Wildcats, and this is something the Knights really need to watch out for.

This weekend’s games are set to be a battle of the forwards, as well as a battle of the goalies. Dean Skinns of the Wildcats is having a great run of form recently and Sam Gospel has maintained his brilliant form – neither goalie will be wanting to let up this in this back to back double-header.