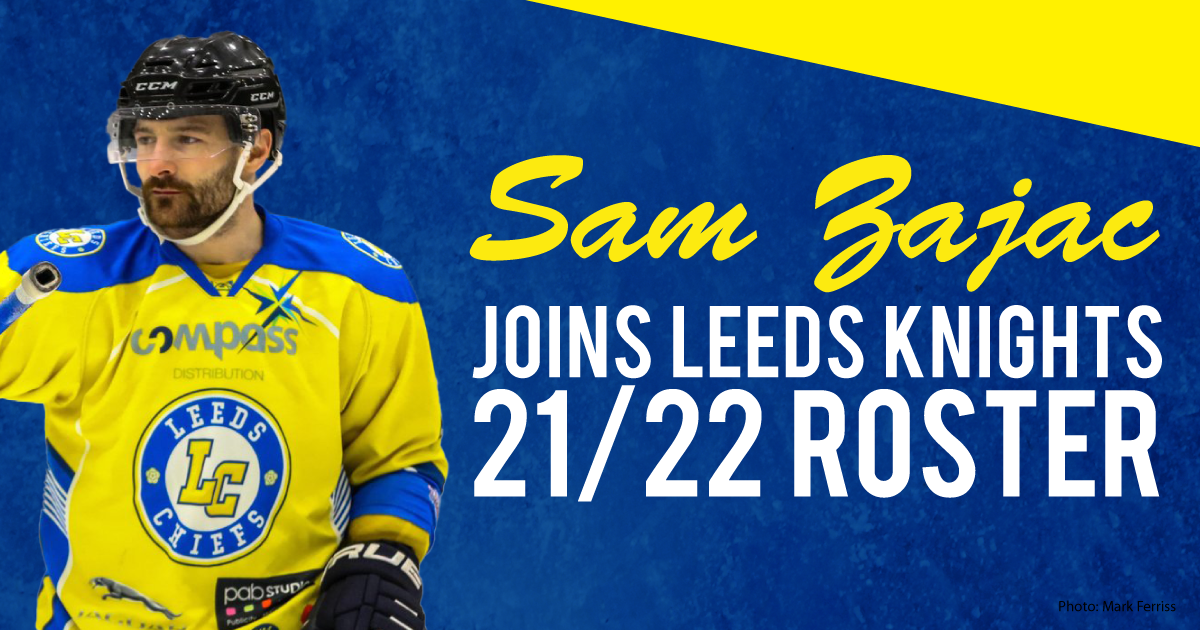 Leeds Knights are thrilled to confirm that Sam Zajac has put pen to paper to return as a player for the forthcoming NIHL Season. After commitments away from the sport led him to stepping down as Player/Coach, Sam has agreed a deal which will allow him to ice back in Knights colours for another year.

Sam has been there and done it all in his career spending time in the EIHL with the then Braehead Clan, and also time with Basingstoke Bison, Telford Tigers and Swindon Wildcats at NIHL level. Undoubtedly his most prolific spell of trophies came with his time in Telford where he won the EPL Cup and League Title in 14-15 before winning the 16-17 league title as well.

Last season in Leeds, Sam posted 29 points in 48 games as well as leading the team in some difficult circumstances with the side playing games all over the UK until the Leeds Rink was ready.

Speaking after signing his deal the Whitley Bay native said:

“The Leeds team means a lot to me, I really have a soft spot for the club. It’s a young club but I have a real connection here and when I knew about the new ownership I felt it was a really good chance to elevate everything that took place.

I wanted to be involved as much as possible and fortunately after several conversations with Steve and Dave we’ve come to an agreement which I’m delighted with. Dave Whistle is the perfect guy to have in place with so many young, talented players on the roster.

Also, Steve is a guy who I have a lot of respect for, the way he runs a club like Swindon shows he does it the right way and with Dave and him running the Knights it was a no-brainer to try and get back on the roster. It’s a match made in heaven.

Head Coach Dave Whistle was equally delighted to have got Zajac back on board:

“I always hoped Sam would be coming back. I asked Brandon (his son) about him and he told me what a good player he is. He’s physical and strong in the corners and a real team guy. He is a good guy in the dressing room, because the players speak so highly of him.

I like having someone’s opinion who I can trust and I know I will be trusting him. In the first few weeks he will be my sounding board and I’m really glad he’s able to come back and be involved.

Similarly, Steve Nell couldn’t speak highly of how much Sam has helped him since taking over the Knights:

“I like Sammy a lot, he has been extremely helpful since I took over. As a player he’s one of the best D men in the league and I’m more than happy to get him back involved as a player. I genuinely think he’ll help glue that team together and he’ll be a positive player in the locker room as well”.