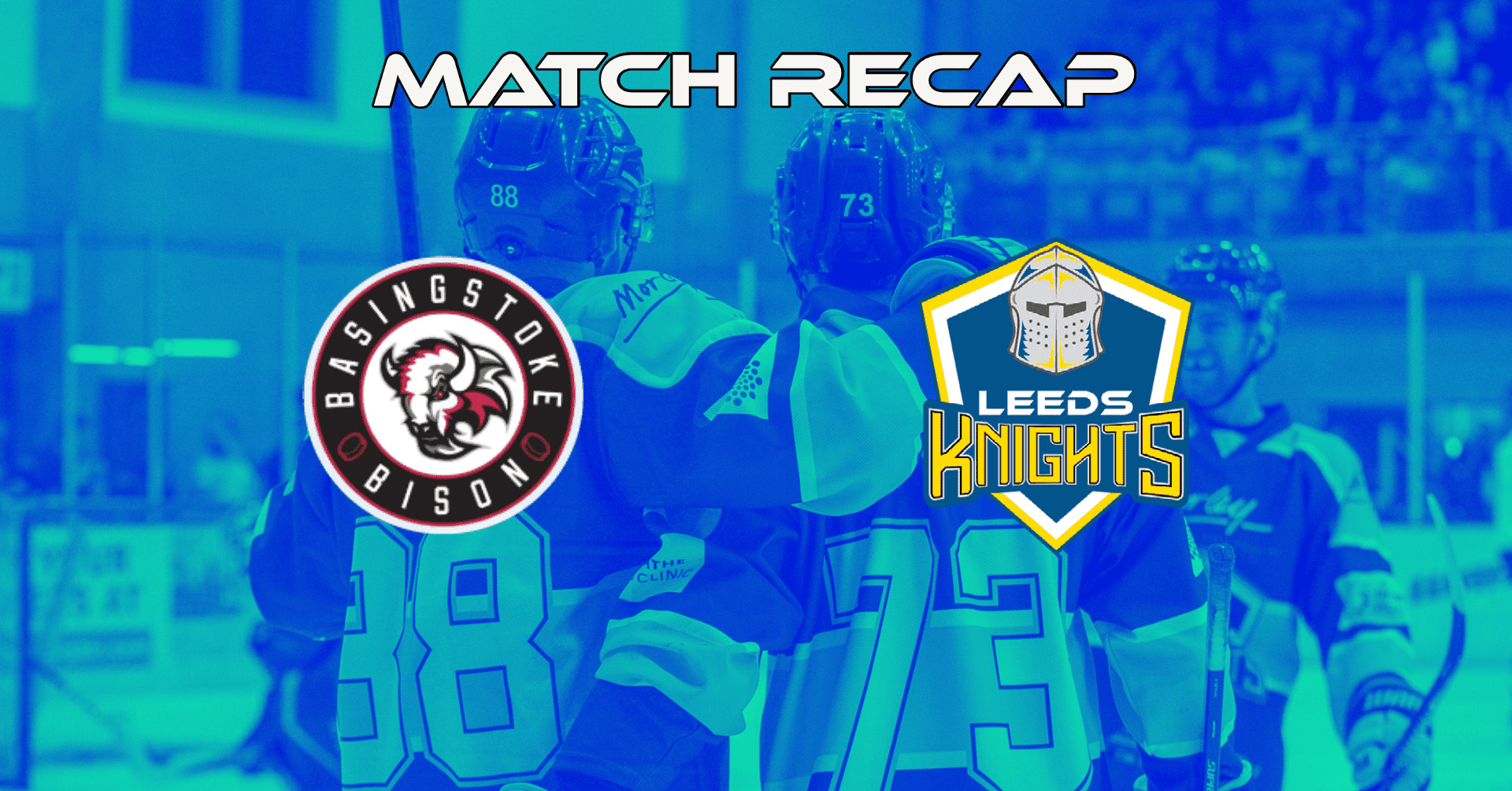 The Knights Make it 8 Wins out of 8 in Basingstoke!

Last night in Basingstoke the Morley Glass Leeds Knights extended the win streak to 8 games in the league and 12 games throughout the season, a win that saw the team remain undefeated for another night.

Tonight the Basingstoke Bison make the journey North, where there’ll be on then hunt for revenge following a hurtful loss in front of their home fans just 24 hours earlier.

Both teams got off to a slow start in Basingstoke, with a feisty but uneventful first 20 minutes that saw the teams tied at 0-0 after the first period. Just 3 shots were had on Sam Gospel in between the pipes, with the Knights having 10 attempts on Mettam in the opposite end.

The second period came and with it a Knights powerplay for the first 2 minutes, the special teams unit worked hard and got the first goal of the night, through #14 Lewis Baldwin. Matt Haywood grabbed an assist on the goal, with a shot off that bounced off the glass behind the net and landed right in front of a scrambling Mettam, Baldwin was quickest to the puck and gave the Knights the go ahead goal.

The Knights withstood the attempts of the Bison for the remaining 18:35 of the second period, in a hard-fought game between two seemingly matched teams, however the pressure all seemed too much by the time the third period rolled around.

With Cole Shudra in the box for fighting, and Jordan Griffin sitting for an unsportsmanlike conduct the Knights were down some crucial players for an extended period of time in the third, and this all proved too much when #3 Bailey Perre was dispossessed at the offensive blue-line by #24 Zack Milton and he went to the races for a 2on0 with team-mate Landsbergs. Despite having the pass option, Milton went alone and finished it well at the low blocker, timing the game at the 44:27 mark.

Tempers were at boiling point and the game looked like it could go either way, and as if it was going to potentially be settled outside of regulation. That was until #9 Grant Cooper wristed home a wicked wrist shot from the slot and put it home glove side on Mettam to once again give the Knights a one-goal lead! Goal was timed at 53:55.

At 56:24 the Knights backs were against the wall, Josh Hodgkinson got called for a minor penalty for interference and the Bison immediately called a time-out, seemingly ready to go on a 6on4 powerplay and the Knights had a big kill ahead. However, just 3 seconds later #91 Doughty for the Basingstoke Bison joined Hodgkinson in the box also for interference, and the teams were even once again!

To secure the win, #88 Adam Barnes finished his empty net chance at 59:45, after a breakout pass from #12 Kieran Brown who got an assist on the 3rd goal.

Man of the match for the Basingstoke Bison – #24 Zack Milton

Adult tickets are just 2 for £20 tonight, use code 2FOR20 at online checkout and don’t miss any of th action at Planet Ice Leeds! Tickets available here.