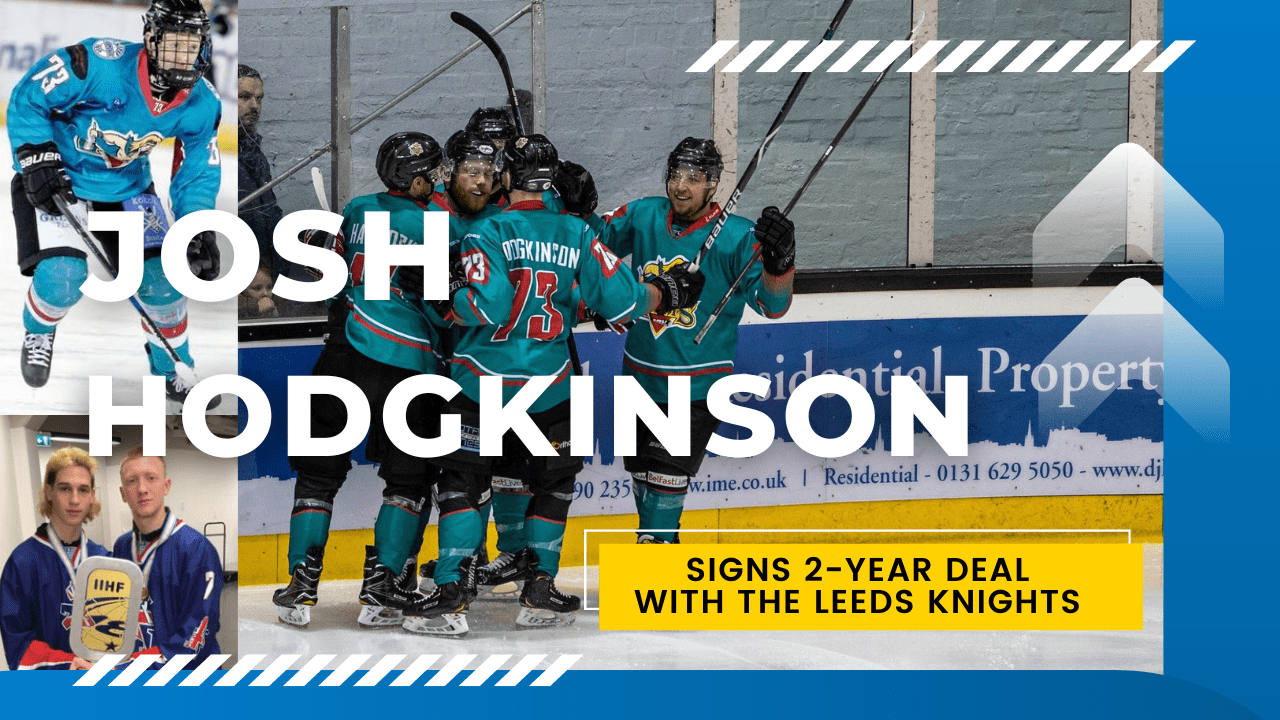 The Leeds Knights reinforce the blue-line with Josh Hodgkinson!

The Leeds Knights are happy to announce another NEW signing for the 22-23 season, as defenseman Josh Hodgkinson puts pen to paper on a 2-Year deal!

The Northern-Ireland native has spent his career playing for the Belfast Giants U16s, U20s and Belfast Giants SNL, for a total of 6 seasons with the Northern Ireland outfit. Josh also spent a year in America, where he played 31 games for the New Ulm Steel.

Despite being a strong defenseman, Hodkinson has put up some impressive statlines, with 28 goals and 7 assists in just 15 games in 2016 being a highlight. While playing for the Belfast Giants SNL and Junior teams, Josh boasts an impressive points per game average of almost 1.7 (77 points in 46 games).

Back in May, we hosted our first ever Talent Identification Trial as Head Coach Ryan Aldridge looked to meet, work with, and watch some talented players that he hoped would one day play for the Knights. Spoiler alert, that day will be coming when we return to action on September the 2nd against the Sheffield Steeldogs!

Head Coach Ryan Aldridge on Josh and the Talent Identification Trial – When I saw his name on the list, I couldn’t put a player to the name. As soon as he stepped onto the ice and I watched his first two strides I remembered who he was from when I had coached against him in a tournament a few years back. I instantly knew the open trial was worth it and was excited at the chance of working with him and having him in Leeds.

Josh shared a similar sentiment to Ryan, and he can’t wait to arrive in Leeds and get back on the ice this September – I can’t wait to get over and get started I’ve played with a few boys on the team representing GB, but I’m really looking forward to putting on the Knights jersey and playing alongside them again! I’ve heard nothing but great things about Leeds and I’m happy that Ryan has given me this opportunity

As aforementioned, we will get to see Josh in Leeds colours for the next two season, as he agreed a 2-year deal that will see him with the Knights until 2024! This was something that Head Coach Aldridge was very keen to have in place, recognising that promising left-handed defenseman aren’t easy to find – Josh will bring a lot to our team. He skates well, shoots well, plays hard and can add a little team toughness in the way that he plays.
Having him for two years just made sense to me, he is a left-handed British defenceman. A good one is hard to find, and we want to invest time into his development over the next two years.

For all player and Leeds Knights sponsorship enquiries please email warwick.andrews@leedsknights.com and don’t forget to visit the Leeds Knights website to secure your 22/23 Season Tickets!

Like what you hear about Josh? You can purchase Josh Hodgkinson’s Own & Loan jersey NOW on our online store