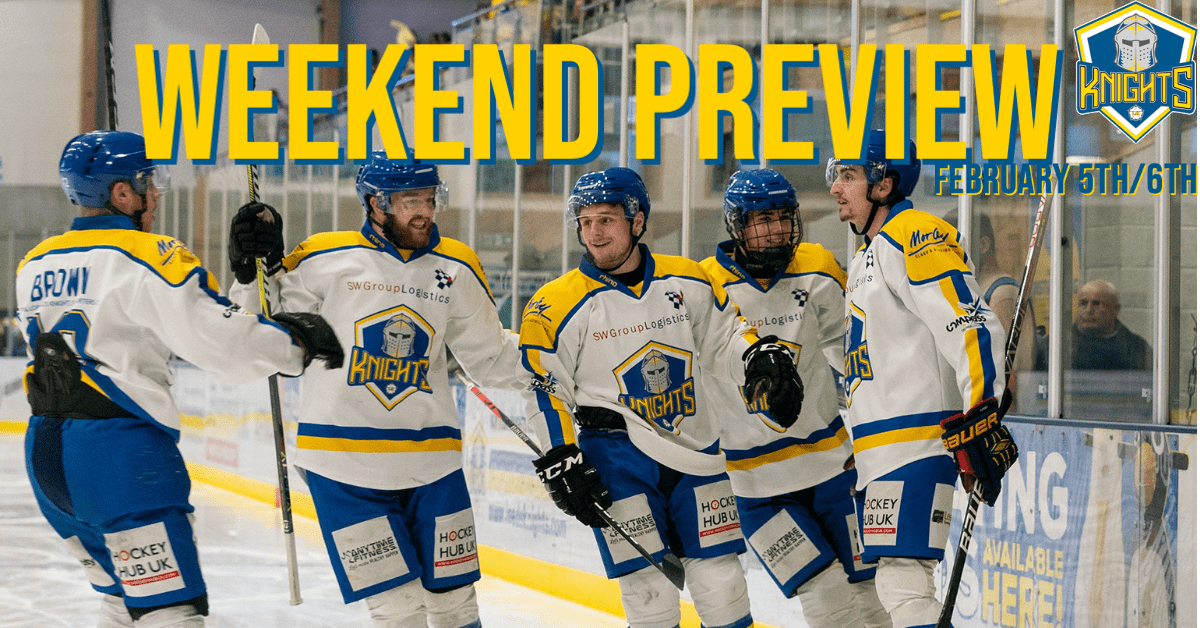 Weekend Preview VS Phantoms and Bison 5th and 6th Feb

This week the Leeds Knights have an unusual two games at home, as the Peterborough phantoms and Baingstoke Bison travel to Elland Road on back-to-back to nights.

Because of this we have discounted tickets for Sunday to £10 for Adults! Click here to purchase tickets.

The Knights enter the weekend as the most in-form team in the NIHL, having won 4 out of 5 of our last games! With the recent points-haul for the Knights, interim Head Coach Ryan Aldridge has impressed fans since his appointment around 4 weeks ago.

This weekend sees the Knights take on the Peterborough Phantoms first, who last week caused an upset with league leaders Telford Tigers as they beat the Tigers 3-2 at home. A 6-3 win over the Bison was also on the cards for the Phantoms, who have won 3 out of their last 5 games.

The Phantoms have played 1 less game than the Knights, and are only 3 points behind, meaning that this game is a massive one for both teams, as they both look to be seeded higher in the newly announced NIHL Final Four playoffs competition. Read more about how the playoffs work here.

Sunday sees us up against the Basingstoke Bison, who make the journey to Leeds for a 17:15 face-off. The Bison are on the back of a 3-game losing streak, having been defeated by Bees, Phantoms and the Steeldogs. Sitting in between the Bees and the Phantoms has meant that the losing successive games to the duo is worrying for the Bison. Basingstoke currently sit 7th and have played once more than each of the aforementioned teams.

Because of the above, the Knights should expect a hungry Bison on Sunday night, and after coming to Leeds and leaving with a win earlier in the year, Basingstoke may well fancy their chances. The Bison’s 4-3 win over the Knights on the 16th of January, was the first game for the Knights with Ryan Aldridge on the bench.

The game was a thriller, with a goal in the first minute of the game, both teams no more than a goal apart for most of the game as well as 34 PIM across the two teams!
Alex Mettam was in goal for Basingstoke and posted an impressive 92.11% save percentage on just under 40 shots, and with a goalie tandem of Mettam and Lawday, the Bison are always a threat.

In addition to the impressive goalies that the Bison have, #91 Aidan Doughty put up two big goals on the 16th of January to propel his team to a win, and long-time UK veteran Ashley Tait as player coach is a tool constantly at play for the Bison.

In order to combat the threats of the Phantoms and Bison, the Knights will look to build on the momentum created from the 4-point weekend against Milton Keynes Lightning last week, where 12 goals were scored by Leeds, with only 4 conceded!

Kieran Brown and Cole Shudra were firing on all cylinders last weekend, with some great individual performances. Brown had 4 goals and 2 assists, with Shudra logging 6 points as well, split evenly between goals and assists. Secondary scoring was also fruitful last weekend, with Gulliver and Barnes both picking up 2 goals and an assist, Davies logging 4 assists in one game and the defence getting involved with 2 assists each for Solder and Hazeldine. Ryan Aldridge and the Knights therefore look to build on these performances this weekend, and pick up more points in the playoff push!

Tickets can be bought here.