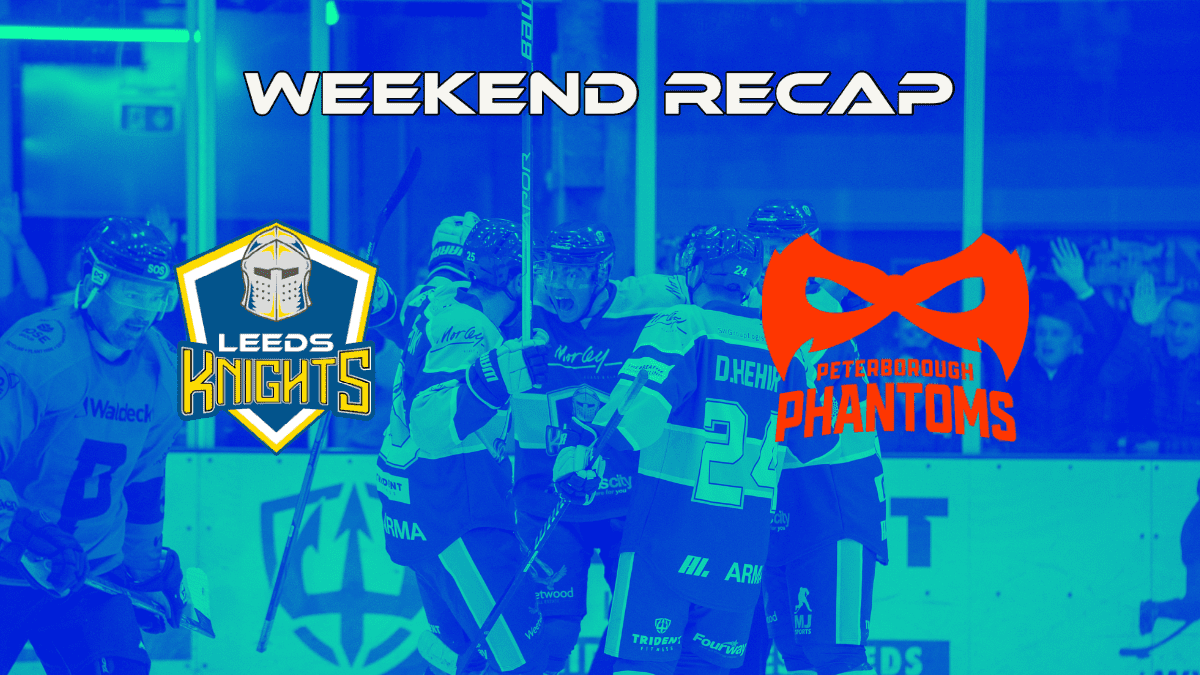 In the second week of the Planet Ice NIHL National Division, the Morley Glass Leeds Knights faced the Peterborough Phantoms on back-to-back nights, starting at The Castle on Saturday night.

The Phantoms came to Yorkshire off the back of a 4-point weekend in their opening weekend in competitive play, with the Knights also getting 2 wins out of 2 the week before – the evening was set-up to be an interesting one!

Saturday didn’t disappoint, with the Knights taking a 4-0 lead and seemingly well in control at the 30 minute mark, with #9 Grant Cooper getting an early brace, with #88 Adam Barnes and #27 Cole Shudra getting a tally each in the second period. However, the Phantoms gave Leeds a fright when they got a powerplay goal before the end of the second period from Captain Will Weldon. 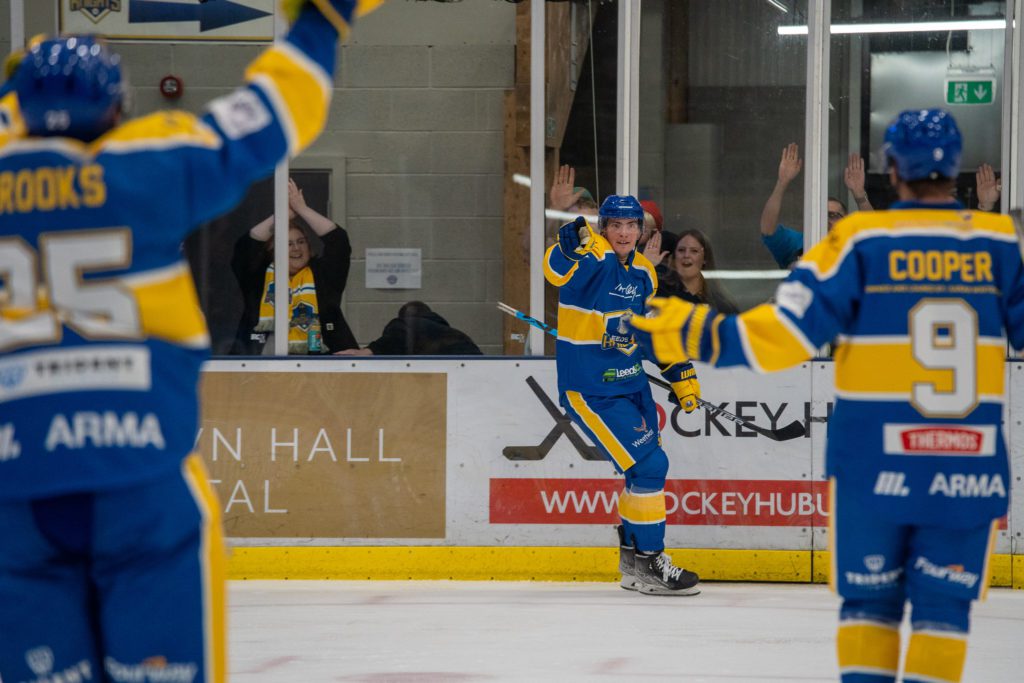 The third period things got even closer, with the Phantoms being back on the powerplay they put their special team to use and one of their newest additions to the roster, #24 Austin Mitchell-King got the visitors within 2 goals.

In the final 5 minutes, the game was looking as though it could go either way, with a battle between the pipes from Sam Gospel and Jordan Marr being a crucial factor in keeping their respective teams in the game. Head Coach Ryan Aldridge has mentioned it two weeks running now, with #27 Cole Shudra once again stepping up to the plate and getting a big goal to help seal the victory – this time with a perfectly placed one-time from the slot, assisted by #9 Grant Cooper for his third point of the game.

Saturday’s Thermos man of the match was #44 Jordan Griffin, who made some massive plays on the defensive side of the puck, killed some important penalties and almost scored in the third period, but was just stopped by an impressive glove save from Marr! 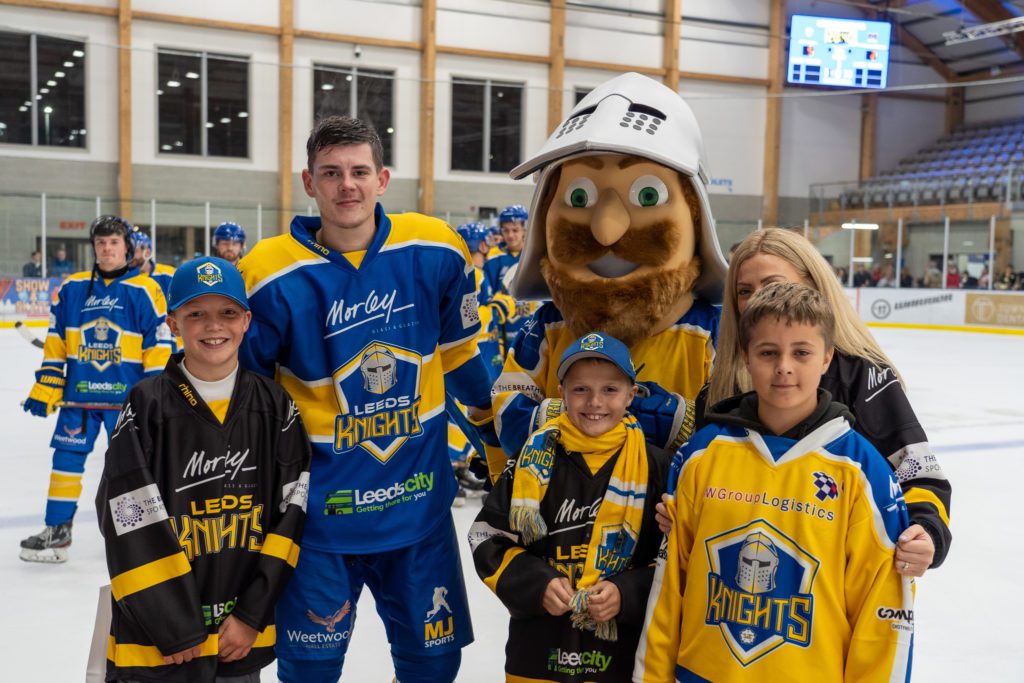 Sunday saw us to take on the Phantoms once again, this time it would be in Planet Ice Peterborough. Peterborough is a difficult rink to play in and it was the Knights’ first visit in the 2022-23 season and the team were hopeful to come out on top once again.

Back in July, when Head Coach Ryan Aldridge signed import Zach Brooks he said: “When you’re in Peterborough on a cold, Sunday night and you’re looking for somebody to get you a big goal, he’s the type of player who is going to get it for you.”

Yesterday we saw this come to fruition in a big way, with Brooksy getting the first goal of the game on the breakaway after a picking up an inch-perfect pass from line-mate Cole-Shudra.

The Phantoms came right back at the Knights, scoring just 3 minutes later, with a well-worked face-off move resulting in Glen Billing open at the backdoor to tie the game up at 1-1 following the first period. The second period brought much of the same, as period 1 and Saturday’s game. Peterborough’s special teams once again came out blazing, with long-term servant to the club Tom Norton poking a rebound home to give the home-side a lead.

The battle of the special teams carried on throughout the game, but it was Zach Brooks with the shorthanded leveller after Bailey Perre and Grant Cooper worked well to clear the defensive zone and give the Knights the chance to tie the game at 2-2 after 40 minutes.

The third period was end to end, non-stop action. The scoring started less than 2 minutes into the final frame, with Grant Cooper carrying on his goal scoring streak, assisted by #25 Brooks and #27 Shudra. Sam Gospel once again came up huge for the Knights, with a breakaway stop just a minute after the Knights took the lead – but the Phantoms pressure proved too much, with #72 Billing getting his second of the night at 43:57 and McEwan adding his name to the score sheet just over 30 seconds later at the 44:38 mark. 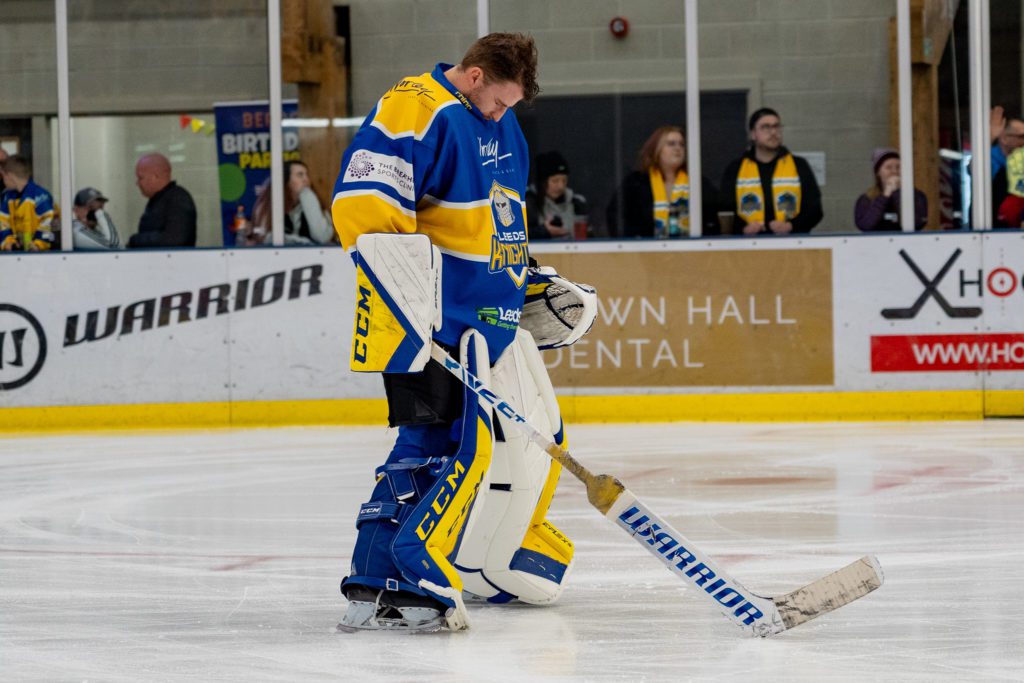 With 15 minutes left on the clock and down by a goal, it looked as though the Phantoms could close the game out and avenge their loss from the night before, but the Knights showed a lot of grit, heart and never gave up. At 46:55 Grant Cooper doubled his tally on the night, despite being tripped on the play he found a way to put it home – assisted by #27 Shudra and #25 Brooks once again! The game was tied, but not for long as the 51stminute saw Grant Cooper grab his third of the period for his hat-trick goal and potential game-winner, after line-mate Zach Brooks went end-to-end in a flash and got the puck across the crease for Cooper to put it home. The second assist went to #27 Shudra.

The Phantoms threw everything but the kitchen sink at the Knights as they tried to get back level, but a powerplay marker in the 52:43 by none other than #9 Grant Cooper gave the Knights a bit of breathing room headed into the final 5 minutes. Slava Kulikov called a timeout for his team at 57:13, after a great penalty kill that saw the momentum suddenly shift in favour of the Phantoms, with Marr going to the bench for the extra attacker.  However, #25 Zach Brooks reaffirmed Ryan Aldridge’s quote, as he picked up his hat-trick goal at 58:04 with an empty netter and earned himself the ‘Knight of the night’ award with his 6-point night!

Sunday’s man of the match was #31 Sam Gospel, a hard-earned accolade after facing 32 shots in just the first 2 periods and making countless breakaway stops, as well as other massive saves at key moments throughout the game. 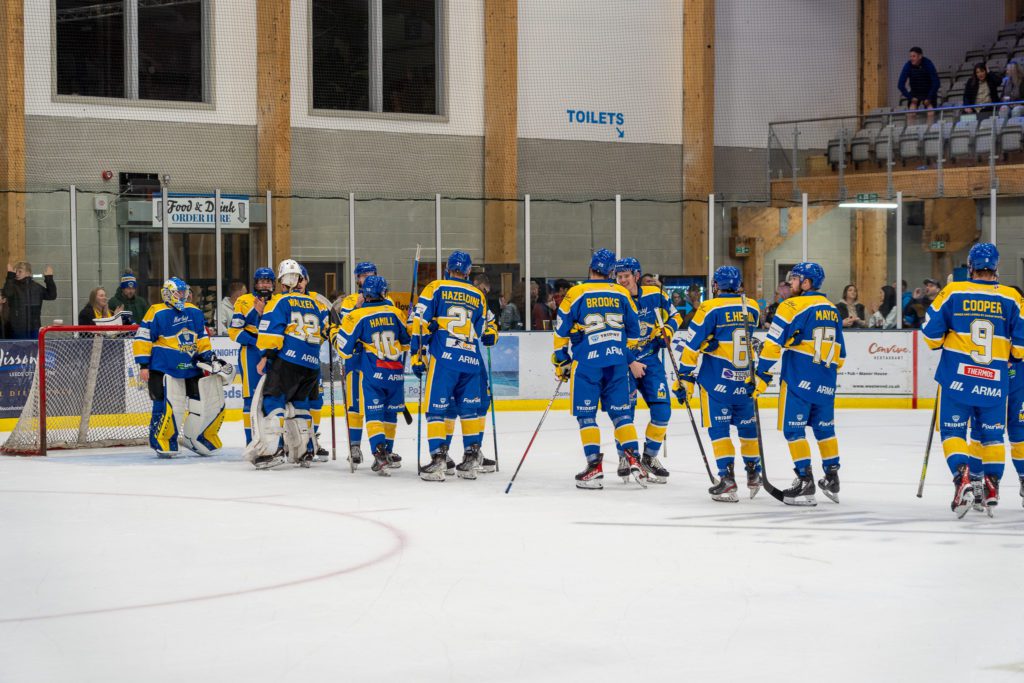