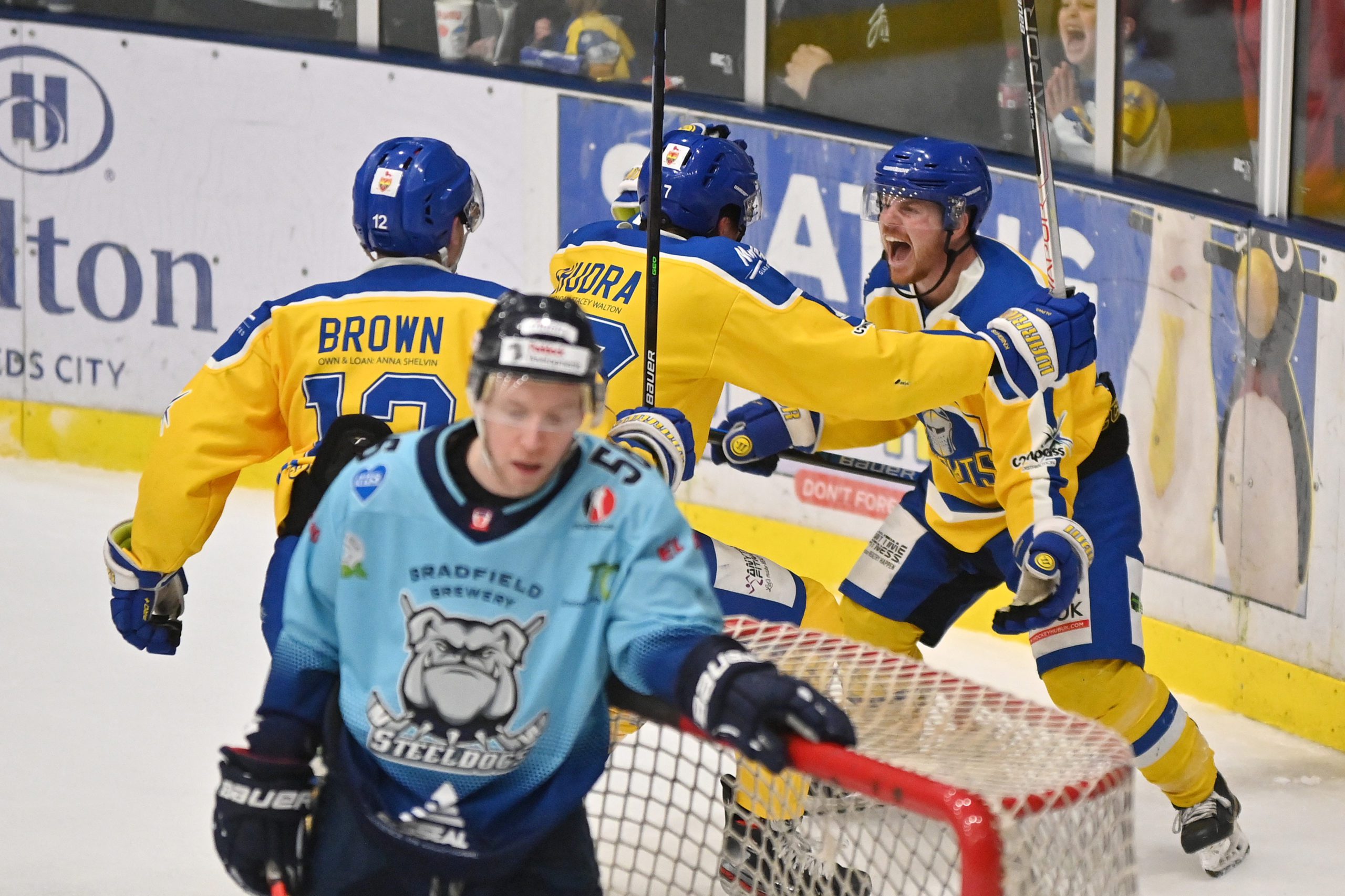 The weekend may have ended on a losing note for Leeds Knights, but there were plenty of positives for Ryan Aldridge’s team to take from a hectic 72 hours.

Four points from a possible six suggests the Knights are heading in the right direction, waking up on Monday morning having risen two places in the NIHL National standings and back up to fifth.

A Lee Bonner hat-trick ensured Sheffield Steeldogs gained swift revenge over the Knights with a 3-2 victory at Ice Sheffield on Sunday.

It followed a dramatic Friday night at Elland Road when Cole Shudra pounced with just seven seconds remaining to seal a memorable 4-3 win against his former club in front of 1,500-plus fans.

In Sheffield, Bonner put the hosts ahead with 23.04 on the board with some help from Matt Bissonnette and Jason Hewitt, the same combination coming together on the powerplay just over 10 minutes later when the former Hull Pirates forward doubled his tally.

Leeds gave themselves a lifeline when Archie Hazeldine halved the deficit at 57.39, but hopes of a late comeback were short-lived when Bonner sealed his hat-trick 40 seconds later.

There was still time for the Knights to apply more late pressure when Ben Solder made it 3-2 with 36 seconds remaining, but the Steeldogs prevailed.

On Saturday, the Knights picked up a first win in four attempts in the league at Raiders IHC.

After falling behind to a ninth-minute strike from JJ Pitchley, the Knights took control, going in at the first intermission 3-1 ahead through goals from Shudra, Kieran Brown and Lewis Baldwin.

Second-period strikes – both on the power play – followed from Matty Davies and Shudra before Adam Barnes got on the board with just under seven minutes remaining.

It was a great way for the Knights to build on the good work from the previous night at home to the Steeldogs.

While nothing could match the late drama that unfolded, the start of the game was frantic enough with three goals being scored in the first three minutes.

The opener came with just 88 seconds on the clock when Shudra broke clear down the right before squaring to Brandon Whistle, who gave Dmitri Zimozdra no chance

But the Steeldogs pulled level 28 seconds later through Brady Doxey and then went ahead less than a minute later when Alex Graham smashed home from 15 yards.

Brown levelled at 9.59 and 2-2 was how it stayed until the Knights’ top goalscorer put the hosts ahead for the first time on a wraparound in the 25th minute.

Chances came and went in a pulsating, end-to-end encounter and when Hewitt lifted the puck over Sam Gospel from the edge of the crease at 58.13 it seemed that overtime was inevitable.

That was until Brown and Davies combined to set up Shudra for a fitting grand finale.